To help the Teen Titans save the world (succeeded).

Pantha, aka Rosabelle Mendez, is one of the many honorary titans from the show Teen Titans and comics. She is a professional wrestler and as such her power is super strength.

She was voiced by Diane Delano.

Pantha first appeared in the episode, Calling All Titans, where she is in a wrestling tournament, beating many wrestlers. Cyborg tried to give a communicator to her to call for help but she always tried to defeat him the wrestling ring. After telling her that the Brotherhood of Evil captured Wildebeest, Cyborg gave her the communicator and she resumed her wrestling match. She was later attacked by Atlas and Adonis, both of which were defeated by her.

Pantha is a large, muscular woman with curly brown hair and wears a yellow Panther mask. She wears a black leotard with yellow belt, arm bands and black & yellow boots.

Pantha is very full of pride. She enjoys to win, and loves to hear her fans cheer her on. She is not arrogant like her fellow peer Wildebeest. She also seems to be very defensive of him. When she was fighting Cyborg, she wouldn't listen to anything he said, but as soon as he mentioned Wildebeest's grim fate, she snapped out of it.

Pantha is endowed with superhuman strength, endurance and resilience. She seems to possess enough strength to defeat Cinderblock. Her skills and experience in lucha libre wrestling, in combination with her powers, make her a formidable hand-to-hand combatant, shown outmatching several of the show's strongest fighters including Cyborg, Mammoth, Atlas, and Adonis. 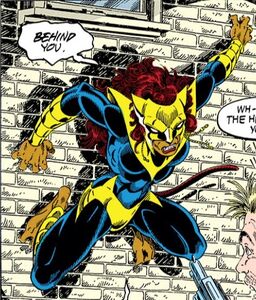