Panther Lily is a supporting protagonist in the anime/manga series Fairy Tail. He is an Exceed who used to work for the kingdom of Edolas as the Magic Militia's First Division Commander of the Royal Army, but later was pulled into Earth-Land (along with all the other Exceeds) and was invited into Fairy Tail by Gajeel Redfox. He is also an old friend of Mystogan, due to saving him when he was a child.

His head is that of a black panther's, but he has a tall, muscular build similar to that of a human's. Later, this body is called his battle form. He has a white muzzle, small red eyes, and a scar running down across his left eye. Like his fellow commanders (except Hughes), he wore a personal set of battle armor with a long cape draped around his body, as well as a helmet vaguely similar to that of Lyon Vastia.

However, when he reached Earth Land, he took a form which is more typical for Exceeds, as a small, bipedal black cat with round ears. His facial features are retained, albeit in a very deformed manner. Although he can return to his former form, he can only do so for a very limited amount of time. His guild tattoo is on his back in the same place as Happy and Carla's and is gray in colour.

Panther Lily seems to have a grumpy disposition and detests noisy people. He first appears by demanding that Byro and the hyperactive Hughes quiet down (although Sugarboy noted that Panther Lily was in a nastier mood than usual). He also seemed to have reservations about Operation ETD, unlike the other commanders. This was presumably because he did not want his own race to be destroyed, despite the fact that he had also said that Extalia was a fake country, one he discarded a long time ago. However, Panther Lily is on good terms with Mystogan as he saved the young prince from death when he was a small child. Panther Lily does not discriminate against Exceeds or humans and treats them as equals, unlike the Exceeds in Edolas who viewed themselves as superior to the humans.

Panther Lily likes kiwis, even singing their praises. Despite his tough attitude, he is frightened of thunder. He also seems to have a penchant for oversized weapons, as shown from his handling of the Bustermarm Sword and his liking for the Musica Sword. 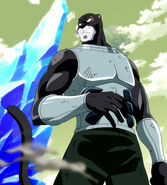 Battle Form
Add a photo to this gallery

Retrieved from "https://hero.fandom.com/wiki/Panther_Lily?oldid=1811584"
Community content is available under CC-BY-SA unless otherwise noted.