Panty & Stocking are main protagonists from the anime & manga series of the same name. They are two polar opposite trash-talking girls.

Panty is a blonde haired girl who transforms her panties into a blue-and-white gun. She can do this with any pair of underwear, sometimes making unsatisfactory weapons, so generally uses her own. Her signature style is a red dress with matching red shoes, but her outfits change throughout the episodes.

Stocking is a goth-type girl with long blue hair an a few pink stripes. She wears gothic-style dresses, and always wears her signature blue-and-black stockings. The stockings transform into Stripes I & II, blue and white katanas, and generally she only uses one. She carries around a kitten named Honekoneko (Bone Kitten) whose expression matches her own.

Stocking is a level-headed and intelligent girl, though, she can be rude if provoked, especially towards her older sister, Panty. Stocking enjoys eating various desserts and sugary food, but doesn't seem to gain weight (she assures all the fat goes towards her breasts anyway). However, she acts quite enraged and sensitive whenever anyone calls her fat.

Stocking is often considered to be the personification of the deadly sin, Gluttony, due to her obsession with sweets. She does not share Panty's obsession with sex, even though she does display some masochistic tendencies, such as bondage, vore and electrocution. This is ironic, since she constantly insults the demon sisters and Corset, by calling them 'BDSM loving freaks'. Instead, Stocking claims she has very special standards in men, and would rather be with someone she loves, than simply for sex. She strings men along (not wanting them to believe she is 'easy'), and would never cheat on someone she truly loves. However, she has been shown to have a very strange and twisted vision of what attractive is, but she also seems to judge people by whats on the inside than out.

She hates spicy food, just as much as Panty hates sweet food.

Panty is often portrayed as a celebrity blonde and is always looking for different men to sleep with. Her main interest is sex. She has low standards in men and is occasionally shown to be unsatisfied after the act. Unlike her younger sister Stocking, Panty doesn't take her job as a ghost-hunter seriously. Instead, she focuses on fulfilling her personal goal of having sex with one thousand men during her stay on Earth. Panty openly admits during one episode that Stocking is the more intelligent sister, and doesn't always appear to think her thoughts through before acting (such as showing a porno she made in a theatre).

Panty is often considered to be the personification of the deadly sin Lust, which is emphasized by the number of times she has had sex throughout the series, and by the X-ray of her brain during the opening sequence, which shows her only thoughts are about both men and sex. Panty is also quite shameless, not caring when some broadcasters were able to see (and record) her panty-less, and even going as far as pole dancing in front of an audience, while on a live show.

Panty jogs to maintain her figure, and is annoyed that Stocking doesn't have to exercise to be slender. She also claims her smaller chest size is more sensitive and responsive than Stocking's bigger breasts. Panty likes spicy food in general, and mentions disliking sugar. Although, she has been seen eating sweets throughout the series and she even ate Stocking's Jean-Paul pudding in Catfight Club. She has also mentioned being hungry causes her to swear more often than usual. Her favorite snack is Death Babanero-flavored potato chips and she has shown a great fondness for living a celebrity lifestyle.

Whenever Panty hunts ghosts, she works in a non-precautious way. She often takes the more reckless route, using pure power to finish the job. However, this style of fighting has caused her to be wide open for attacks, including losing her panties in the heat of the moment and forcing her to improvise with either using normal weapons or other underwear.

To prepare for battle, Panty removes her panties. Her ability is being able to transform her own panties into a pistol named Backlace, a spiritual gun which can hurt ghosts. Backlace is unable to harm humans (aside from just a slight painful stinging sensation), however, it has not yet been confirmed if all heavenly weapons follow this rule.

Backlace seems capable of harming demons, angels, and anything spirit related, such as ghosts. Backlace, when combined with Stocking's panties or any other underwear, can become 'upgraded' versions of her usual gun. So far, two examples of an expanded Backlace are an assault rifle version and sniper rifle version. In the absence of Backlace, Panty can fight using normal guns. However, she usually avoids this, because she does not like the smell of gunpowder, and the fact that normal guns don't do much damage.

Panty is also able to transform other people's underwear in guns, but the weapon design is limited due to the wearer's genitals, becoming curved, short or even bent. However, some, like Brief's, prove to be even more capable than Panty's own.

To prepare for battle, Stocking removes her stockings, to which she can transform into a pair of katanas, known as Stripes I & II, which can be attached at the base of the hilt. It's safe to assume she can form other blades as well, considering the range of weaponry at Panty's disposal.

Stripes I & II are able to hurt any spiritual being, such as angels, demons and ghosts. 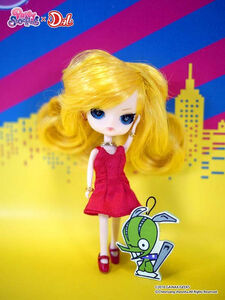 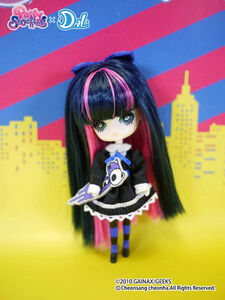 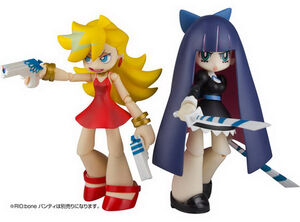 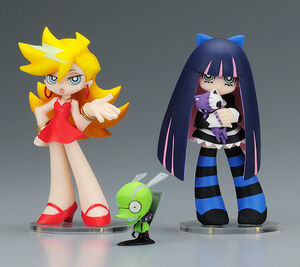 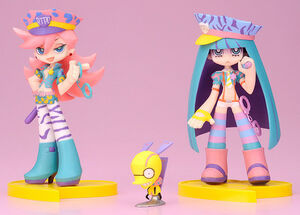 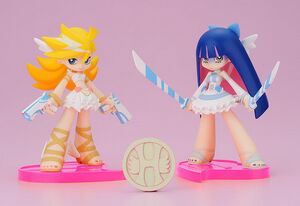 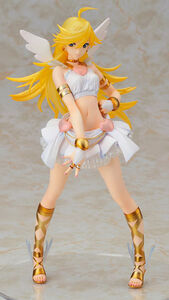 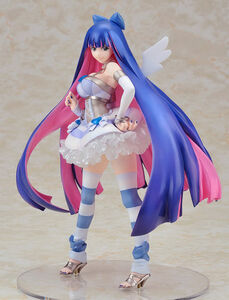 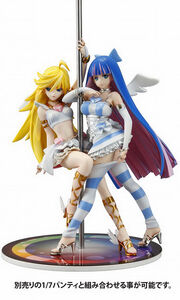 Retrieved from "https://hero.fandom.com/wiki/Panty_%26_Stocking?oldid=1853096"
Community content is available under CC-BY-SA unless otherwise noted.