Defeating and taking down enemies.

Just like Luigi, he is voiced by Charles Martinet.

Role in the game

Paper Luigi is Luigi's paper form, just like Luigi, he can jump very high, unlike Paper Mario. He is a lazy coward just like his original counterpart from the game Super Mario series.

He appeared in Paper Mario on the Nintendo 64 when he plays a major role in the game, he remains at home doing chores and built himself a secret basement so he can keep a secret diary.

He appeared again in Paper Mario on the GameCube when he plays a minor role when he tells his brother stories of his own adventure in the Waffle Kingdom to save its princess, Eclair from the Chestnut King. In addition, the L Emblem badge also changes Paper Mario's clothes into the color scheme of Paper Luigi's. 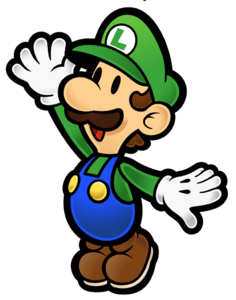