Artificial Intelligence
Parado (パラド Parado) is one of the leaders of the Bugsters and an antagonist-turned-main protagonist of Kamen Rider Ex-Aid. He takes the appearance of a teenager with pixel-themed pants. Lacking his game correspondence, he is a manifestation of Emu Hojo's desire from his childhood to have a playmate. Although protective of his race, his true agenda is to enjoy fighting Emu due to the original purpose of his existence while hating humanity for being a prideful race.

Later on, after being made by Emu to experience death, Parado fully realizes the consequences of his actions and backs away from his plans to use the Kamen Rider Chronicle as a means to genocide humanity and assists the CR in saving all the victims of Game Disease.

Parado was the first Bugster to exist during Emu's infection and has since dominated as his gaming persona “M”. His time within Emu's body helped the former to enjoy long popularity as a gamer. After beating a young Nico in the 2010 Tekken tournament, the vigorous training he went through took a huge tool and collapsed. During that time, scientists from Next Genome under Kuroto's request took advantage by harvesting the virus and separating Parado from his host while the surgeons vanished. His departure allowed Emu to regain his inspiration as a doctor while retaining his gaming persona. In the present day, Parado joins forces with Kuroto to help him with Kamen Rider Chronicle's completion but would help his former host on certain occasions before completely deserting Kuroto for abusing Motors Bugster. After killing Kuroto and taking over the Kamen Rider Chronicle project, Parado completes it via Graphite and a brainwashed Poppy's help, using it to eliminate humanity for the Bugsters. Seeing how Emu prioritized saving Poppy, Parado possessed his host again and obtained his DNA sample, forcing the young intern to fight into the point of exhaustion before Genm's intervention.

During the midst of the Kamen Rider Chronicle game as the villain character, Parado became afraid of being "permanently killed" as he attempts to face Masamune to avenge Loverica. But Parado confronts Emu instead, who needs to erase his Bugster counterpart to obtain the Perfect Knockout Gashatrophy in hope of saving Nico. Parado ends up being "destroyed", metaphysically drowning while Emu loses his ability to transform. But in reality, he was reabsorbed by Emu before being released from his host using the Mighty Brothers XX Gashat, with the two now on good terms as they resolve to end Kamen Rider Chronicle together.

By his own, Parado demonstrated the ability to both teleport and block Lazer's Giri Giri Critical Finish without suffering any damage, while still in his human form. As he is Emu's Bugster, he is capable of existing as Genius Gamer M even after the Next Genome's operation split them both. It was also through this link that he obtained Emu's DNA imprint as the component needed to utilize Kuroto's Gamer Driver after goading the young intern to use Maximum Mighty X's reprogramming power.

After the crisis in Heisei Generation, Parado disguises himself as a second Dr. Pac-Man in Kamen Rider Genm to support Kuroto in creating the Gambarizing Gashat and those themed after Bandai Namco games.

Using data from Emu's Mighty Brothers XX Gashat, Kuroto manages to complete Parados personal Gashat, the Gashat Gear Dual (ガシャットギアデュアル Gashatto Gia Dyuaru), for him to transform into Kamen Rider Para-DX (仮面ライダーパラドクス Kamen Raidā Paradokusu) without a Gamer Driver like the other Riders. According to Kuroto, Para-DX is a boss character for Kamen Rider Chronicle so he created the Gashat Gear Dual for Parado to utilize while the game was under development. The Gashat Gear Dual is composed of two Gashats for Para-DX to change into one of two Level 50 forms depending on which logo position he rotates its dial to before pressing its corresponding Gashat's button. He then inserts the Gashat Gear Dual into the strap-like Gear Holder (ギアホルダー Gia Horudā) on the right waist of his gold-colored Para-DX Buckle (パラドクスバックル Paradokusu Bakkuru). When activating either Gashat, a Game Area is created which generates several Energy Items with unique power-ups. Each of Para-DX's forms has a variation of a Critical finishing move that is activated by first rotating the Gashat Gear Dual's dial to its neutral position, then rotating it back to its previous logo position, and finally inserting the Gashat Gear Dual back into the Gear Holder.

As Parado is partially Genius Gamer M, he dominated the Double Action Gamer Level XX R form and took full control of it when possessing Ex-Aid, forcing both halves into fighting each other.

Parado later claimed Kuroto's Gamer Driver as his own to use in conjunction with the Gashat Gear Dual, which combines Perfect Puzzle and Knock Out Fighter into Perfect Knock Out (パーフェクトノックアウト Pāfekuto Nokku Auto), for him to transform into a fusion of his Level 50 forms known as Perfect Knock Out Gamer Level 99 (パーフェクトノックアウトゲーマーレベル99 Pāfekuto Nokku Auto Gēmā Reberu Nainti Nain) by inserting the Gashat Gear Dual set to its neutral position into the Gamer Driver and then pulling its lever. Para-DX's Gashacon Weapon in this form is the Gashacon Parabragun (ガシャコンパラブレイガン Gashakon Parabureigan), which has two modes: ax and gun. By closing and pulling the Gamer Driver's lever a second time, he can perform one of three Critical finishing moves depending on the Gashat Gear Dual's current position. In addition to both of the Gear Holder-based Critical finishing moves each activated by rotating between the Gashat Gear Dual's logo positions (Critical Combo via Perfect Puzzle and Critical Smash via Knock Out Fighter), this form has its own exclusive Critical finishing move known as the Critical Bomber (クリティカルボンバー Kuritikaru Bonbā) that is activated when the Gashat Gear Dual is in its neutral position. After joining forces with Ex-Aid, Para-DX can use the Mighty Brothers XX Gashat in the Gashacon Parabragun to temporarily split his Perfect Knock Out Level 99 form into his Puzzle Gamer Level 50 and Fighter Gamer Level 50 forms. 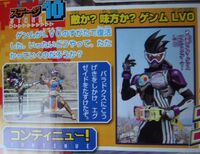