Hanging out with Wednesday Addams

To find her true self (succeeded)

Parker Needler is a supporting protagonist in the 2019 animated film The Addams Family. She is the daughter of Margaux Needler, the villain of the film and the best friend of Wednesday Addams.

Parker is shown to be depressed, being neglected by her mother, Margaux Needler. The opposite of her mother, Parker loves things being different. Having no actual friends other than the twins Kayla and Layla, she spends all her time blogging on her phone. When she met Wednesday Addams, who is equally as depressed with her life as the former, they bond with each other, and with the help of the latter, Parker finds her true self as a Goth instead of pretending to be a "peppy" girl in bright colors.

Parker is the daughter of Margaux Needler, a deluded and insane reality home developer who dislikes anything different. She was also bullied in school by Bethany, the popular school bully until she met Wednesday Addams, and the two bonded. In the science class, she witnessed Wednesday bringing frogs back to life and aiming them at Bethany, who runs away screaming as the frogs chase her along with the rest of the class except Parker, Wednesday and two other girls. Later, Parker changes her style to a gothic style, while Wednesday temporarily dresses in pink, much to the shock of their mothers, Margaux Needler and Morticia Addams, respectively.

Later, Parker can't find her phone for three days, and Wednesday points to a secret room, which is Margaux Needler's crafting room, to which no one is allowed to enter. The two girls discover a secret room under Parker's house revealing that Margaux has been planting hidden cameras in every house she designed in town. However, Margaux catches the two and locks them in the attic, after which a shocked Parker says that she should have picked to live with her father, but Wednesday manages to break them out.

Later, after they escaped, Parker and Wednesday proceed to expose the former's mother's treachery, and when Margaux Needler is defeated, the citizens realize their error and help the Addams Family to rebuild their house and they now live peacefully and Wednesday and Parker continue being best friends. 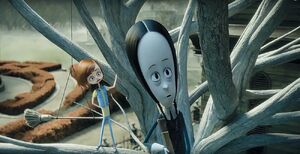 Parker with Wednesday Addams
Add a photo to this gallery

Retrieved from "https://hero.fandom.com/wiki/Parker_Needler?oldid=1788832"
Community content is available under CC-BY-SA unless otherwise noted.