To help Rapunzel in any way he can

Animal friend
Pascal is Rapunzel's pet chameleon and a major character in Disney's Tangled franchise. Pascal is a true and loyal friend to Rapunzel, even though he can't communicate verbally.

As an infant, a small and defenseless Pascal would remain by his mother's loving side at all times. On a dark and stormy night, the two chameleons were attacked by a venomous snake. Though Pascal's mother was killed while fending off the snake, the sacrifice allowed Pascal time to reach for safety. Upon stumbling into a secluded forest, Pascal heard the voice of a young girl within a tower, and curiously climbed up its length. At the top, Pascal was attacked by the snake and suffered from its venomous bite, dying almost instantly. Fortunately, the young girl he had heard was Rapunzel, and she was able to use the healing magic of her hair to revive Pascal. Though at first timid, Pascal quickly warmed up to Rapunzel, and eventually revealed that he was on his own. Rapunzel, being alone most of the time herself, offered to have Pascal live with her, so that neither would have to be alone again. Pascal warmly agreed, and the two would remain together as best friends ever since.

At adulthood, Pascal would continue to serve as Rapunzel's best friend and confidant. Aside from Mother Gothel]], he was Rapunzel's only friend during her imprisonment within the tower. For reasons unknown, however, his residence was kept confidential, as Rapunzel advised him to go into hiding whenever Gothel was near.

He is generally seen mounted on Rapunzel's shoulder, and is usually looked to whenever the princess is in need of guidance or motivation. Pascal doesn't speak, however, and only communicates through a broad range of facial expressions and body gestures.

He is Rapunzel's childhood pet, and best friend. It is clear that he is one of the driving forces in helping Rapunzel see that she needs to leave the tower. Pascal is constantly cheering her up, rooting her on, and refusing to allow her to take steps backwards.

After they defeated Mother Gothel, Pascal moves with Rapunzel into the castle, and helps her whenever there is trouble.

Pascal is a true and loyal friend to Rapunzel. Even though he can't communicate verbally, it is clear that he is one of the driving forces in helping Rapunzel see that she needs to leave the tower. Pascal is constantly cheering her up, rooting her on, and refusing to allow her to take steps backwards. However, even though he cheers her on, he doesn't know much about the outside world either, and despite being just as excited as Rapunzel to experience it, he was originally just as afraid. Since he is a chameleon, he can change color, usually to express his mood with his colors.

Being Rapunzel's only companion, Pascal has grown very protective of the lost princess, as seen when they first encounter Flynn Rider, as well as Maximus , and most notably seen during the climatic struggle with Mother Gothel in the end. The chameleon doesn't appear to attach well to those who harm Rapunzel in literally any way, showing no remorse for Gothel when she began aging to death, going as far as to tripping her out the tower entrance.

Still, Pascal can be highly affectionate to those who seem worthy enough, as seen when Flynn falls for Rapunzel and vice versa; the chameleon showing sympathy and support of the relationship, despite originally seeing Flynn as only a means to seeing the world. This is seen again through the chameleon's newfound friendship with Maximus in Tangled Ever After.

Pascal is first introduced playing hide and seek with Rapunzel. At this time it is shown that Pascal also wants Rapunzel to leave the tower but, due to Mother Gothel, seems impossible. Whenever Gothel appears, Pascal blends into the background to hide. Pascal also joins Rapunzel in her chores, playtime, and painting. When Pascal finally convinces Rapunzel to leave the tower, she is harshly screamed at by Gothel for having such a ridiculous dream. Along with Rapunzel, Pascal is heartbroken. When Rapunzel and Pascal are intruded by Flynn Rider (aka Eugene Fitzherbert), he becomes extremely protective and suspicious of him but eases up when he becomes their ticket out of the tower.

During their adventure outside, Pascal constantly watches Eugene, but eventually warms up to the thief upon seeing the latter's initially selfish ways dissolve through his love for Rapunzel. After seeing the "floating lights," Rapunzel is manipulated by Gothel to believe Eugene had no feelings for her, and was only interested in receiving his satchel. As such, Pascal sadly joins her as she returns to the tower.

When Rapunzel finally realizes who she really is, she confronts Gothel. After Gothel reveals her true colors, she traps Rapunzel and stabs Eugene when he arrives. Pascal attempts to stop Gothel but she kicks him away to the other side of the room. When Pascal realizes Rapunzel must give up her freedom to save Eugene, he is devastated. When Eugene cuts Rapunzel's hair taking away its power, Mother Gothel ages and Pascal trips Gothel making her fall out the window and turns into dust during the long fall. As Rapunzel's crying tears save Eugene, Pascal joins Rapunzel and Eugene as Rapunzel reunites with her birth parents. Pascal is last seen enjoying the celebration of Rapunzel's return to the kingdom and watches as Rapunzel and Eugene share a kiss.

Maximus and Pascal are responsible for the loss of Rapunzel and Eugene's wedding rings when one of Pascal's stray petals falls onto Maximus' nose. Maximus, who is holding the rings, then sneezes, causing the rings to roll away and disappear. After having visions of everyone in attendance becoming upset at the loss of the rings and of an explosion destroying the entire kingdom, the pair then endeavor on a comedic journey to retrieve them.

Maximus runs off to retrieve Eugene's wedding ring while Pascal chases down Rapunzel's. The journey ends up turning the entire kingdom (except the chapel) upside down, including the decorations and celebration process. In the end, they retrieve both rings and return just in time for the bride and groom to exchange the strangely clean rings (Pascal and Maximus are covered in tar when they snuck back in). After the ceremony is finished, Maximus and Pascal relax, but Maximus accidentally bumps a cart carrying the wedding cake, causing it to roll down the hall and out of sight. Just then, Eugene asks 'who wants a piece of cake?', causing Pascal and Maximus to freeze in fear.

Tangled: Before Ever After

Taking place after Tangled and before Tangled: Ever After, Pascal has joined Rapunzel as she settles herself into Corona's castle and assumes her role as princess and heir to the throne. He joins Rapunzel in practically every endeavor, and is fully aware that she is feeling apprehensive toward her time-consuming duties as a royal, especially as her coronation to be crowned an official princess draws near. To ease some of Rapunzel's stress, her lady-in-waiting, Cassandra, offers to take Rapunzel over Corona's border wall to explore some of the outside world. Pascal, meanwhile, is told to stay behind and cover for Rapunzel's disappearance.

During Rapunzel's absence, Eugene visits her bedroom to apologize for putting Rapunzel on the spot with a surprise, public proposal. Pascal uses some nearby objects to disguise himself as Rapunzel and comes to understand and sympathise with Eugene after learning of his reasons behind the proposal. However, he can no longer continue his illusion and accidentally exposes himself. Eugene tries to get answers, but receive none, instead teaming up with Pascal to keep Rapunzel's disappearance a secret from her father, King Frederic. When Rapunzel returns the next morning, Pascal and Eugene discover that the princess' 70-feet of magic hair has somehow returned, much to Pascal's delight. Pascal, Maximus, Eugene, and Cassandra help Rapunzel keep the return of her hair a secret from her parents, until a band of pirates crash Rapunzel's coronation. Cassandra sends Pascal to alert Maximus, and the duo arrives onto the scene with the guards, just in time to defeat the pirates' leader Lady Caine.

Unfortunately, King Frederic forbids Rapunzel from leaving Corona's borders without his permission, fearing the return of her hair will attract threats. Pascal sits alongside Rapunzel as she mourns the loss of her freedom, but both of their spirits are lifted once Eugene arrives to lighten the mood. Pascal then leaves the scene to give the two their privacy.

Pascal appears in every episode of the animated TV series thus far, generally playing a supporting role as Rapunzel's sidekick, assistant and conscience.

In "Pascal's Story", Pascal longs to spend quality time with Rapunzel again, but her busy social and professional lives gets in the way of this repeatedly. Eventually, the two manage to set up a dinner date, but this is also ruined, as Rapunzel's duties kept her busy beyond the time of their date. Heartbroken and feeling his place in Rapunzel's life is lost, Pascal leaves the castle and returns to the tower. Rapunzel panics at the realization that Pascal is gone, and a search throughout the castle ensues for him. The search eventually takes her to the tower, where she finds Pascal in battle with the snake that killed his mother. The two are able to defeat him, however, and a relieved Rapunzel embraces her friend. It is then that Pascal is reminded of Rapunzel's love for him, and the fact that no one could take his place in her heart. During the epilogue, Rapunzel is shown carrying out her busy schedule, but with Pascal by her side the entire time.

In the second season, Pascal joins Rapunzel on her journey to learn the truth behind the black rocks. In "King Pascal", the group is caught in a storm that shipwrecks them in a remote island ihahbited by leaf-life creatures called the Lorbs. The Lorbs mistake Pascal for a mythical hero that is destined to defeat a bug. Pascal, having felt useless to Rapunzel and neglected in recent days, enjoys the attention of the Lorbs and develops an inflated ego. He mistreats Rapunzel and Cassandra while in power. When the time has come for Pascal to face the bug, he finds that it is a giant, fire-breathing monster. Rapunzel arrives in the midst of the battle and apologizes to Pascal for her behavior. She then helps Pascal to defeat the creature, alongside Cassandra and Maximus. Despite having learned the truth of Pascal's identity, the Lorbs still hail him as a hero.

A silhouetted Pascal can be seen on one of the medals on the wall of Chief Bogo's office in Zootopia.

In Ralph Breaks the Internet, Pascal can be seen perched atop Rapunzel's paint box in the Disney Princesses' private quarters.

Pascal appears as a resident of his homeworld, Kingdom of Corona. He joins Rapunzel, Flynn, Sora, Donald and Goofy on their adventure.

Pascal was part of the Rapunzel add-on costume in Disney Universe.

Pascal makes an appearance in Epic Mickey: Power of Illusion, alongside Rapunzel, featured as one of the captive Disney characters and victims to the scheme of Mizrabel.

Pascal is mentioned in the Disney INFINITY, when Rapunzel asks him if the new world she is in is beautiful.

Pascal and Rapunzel hearing Gothel call outside down below the tower. 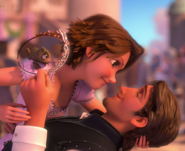 Retrieved from "https://hero.fandom.com/wiki/Pascal?oldid=2217154"
Community content is available under CC-BY-SA unless otherwise noted.