Member of the Dalmatian Plantation

To be saved from Cruella DeVille (succeeded)

One of a kind wonder dog

Patch is one of Pongo and Perdita's puppies, a supporting character in the 1961 Disney film One Hundred and One Dalmatians and the 1997-1998 television series 101 Dalmatians: The Series and the titular main protagonist of the film's 2003 sequel 101 Dalmatians II: Patch's London Adventure. He is the most prominent of the Dalmatian puppies in the 101 Dalmatians franchise.

He is a small puppy with a large black patch over his right eye, hence his name.

He feels lonely and left-out oftentimes with his family, thinking that he's just one of the famous 101 Dalmatians and longs for a chance to become separate and leave the shadow of his brothers and sisters. He is a good pup, very adventurous, bold and strong-minded.

Today, Patch is commonly used alongside Cruella De Vil as an icon to represent their respected films in merchandise and crossover material.

Patch is one of the 99 puppies. Like his siblings, he is frolicsome and adorable, but he can get rather wild, often fantasizing about mauling the villain Dirty Dawson from the Thunderbolt television series.

He looks up to his father as his role model especially after he was rescued by him. When he got attacked by Jasper and Horace, Patch was the only one of the puppies to attempt to fight back.

He also holds a small rivalry with Lucky. He and Lucky are very similar in personality, however there are a few differences.

Lucky is brash and confident as apposed to Patch who is insecure and modest. Lucky is apparently considered the favorite of the pups, which could be part of their rivalry.

In the sequel, he displays an amazing amount of dedication and skill when making an escape with his siblings, showing that he is a born leader. His fanboyish obsession and memorization of every one of the show's episodes proves to be a distinct advantage, as he instantly breaks through cage door with his foot, barks on top of an elevator to lure away Cruella, Jasper and Horace, uses a painting as a trampoline to send his siblings out through the open roof window while he uses a hanging spot to swing his way out through it and jumps from a passing car onto the van and ties up Cruella in that order, just as Thunderbolt did in the show.

Patch was first seen watching television with his brother and sisters. Patch seems to be addicted to the TV show The Thunderbolt Adventure Hour and interacts with it.

After Patch and the puppies are put to sleep they are kidnapped by Jasper and Horace, henchmen to Cruella De Vil who seeks their skin to create coats.

Patch's parents journey to save their puppies and Patch escapes with the rest. When needing to get past Cruella, Patch and his brother Lucky get into an argument and push each other in a fireplace and are covered in soot.

This gives his father the idea to disguise themselves. Eventually they returned and Patch is safe at home with his family.

Patch is also the main character in the 2003 sequel 101 Dalmatians II: Patch's London Adventure. Patch feels unimportant being that he is said to be just another one of the 99 puppies. When he's accidentally left behind on moving day, Patch runs away and meets his hero, Thunderbolt.

They spend time acting like heroes around London but when Cruella De Vil returns and captures his siblings, Thunderbolt and himself, he learns that Thunderbolt is just a television star and all the powers and villains on his show were fake.

Patch uses his wits and boldness to save his family and defeat Cruella De Vil with the help of Thunderbolt. Patch reunites with his family and is finally given the attention he awaited. 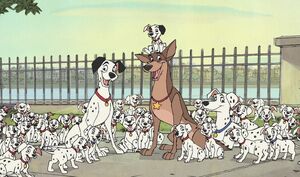