The Girl of Knowledge and Shade

Use her rain magic to protect Flandre Scarlet from escaping the mansion (Embodiment of Scarlet Devil; succeeded)
Come to Suika Ibuki's party at a shrine to increase her luck (Silent Sinner in Blue; succeeded)
Find a book that records detailed content of vengeful spirits first (Subterranean Animism; failed)

Patchouli Knowledge is a character from Touhou Project debuting in Embodiment of Scarlet Devil. She is a very smart, asthmatic magician from the Scarlet Devil Mansion. Although she has only been a boss in one game, and playable character in three others, she is still a very popular character, showing up in many endings and is referenced quite often. She spends most of her time in the mansion's library reading and writing magic books. It seems that she's capable of very powerful magic of all kinds, using many elements in a single spell, but due to asthma and general poor health, she's often unable to recite her spells.

In Embodiment of Scarlet Devil, she attempts to stop the player from going further into the Scarlet Devil Mansion. In the extra stage, she tries again, and uses much more powerful magic, in part because she says she "felt better that day".

She rarely leaves the Scarlet Devil Mansion, but in Immaterial and Missing Power, she makes an exception to go investigate the recent strange events. In other character's scenarios, she's visited by several of them, thinking that she, of all people, must know what the strange mist is. However, getting a straight answer from her is anything but easy.

In Scarlet Weather Rhapsody, she decided to find what was the cause of the weather disaster.

In the events of Subterranean Animism, she noticed the abnormalities in the underground, and had Marisa go with the help of Yukari preparing Marisa's options.

During Silent Sinner in Blue, Patchouli constructed a rocket ship for the girls to fly to the moon.

She doesn't have a very proactive personality, but rather always walks her own path. However, she's always interested where knowledge is concerned and will proactively go and try to acquire it. She does everything by the book, but still makes a lot of mistakes. She's also described as very dark and taciturn. Dark doesn't mean "evil", it just means she likes to keep to herself and doesn't interact well with others. Taciturn means she's silent in expression and manner. 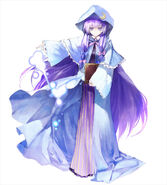 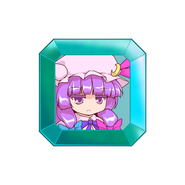 Riverbed Soul Saver
Add a photo to this gallery 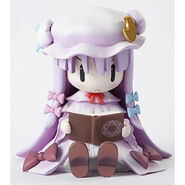 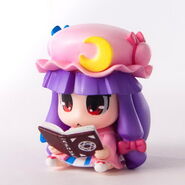 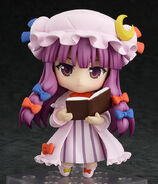 Retrieved from "https://hero.fandom.com/wiki/Patchouli_Knowledge?oldid=1790456"
Community content is available under CC-BY-SA unless otherwise noted.