Hero’s ally
Patia is a summonable playable character from Dragalia Lost and is a supporting character of the story.

She was voiced by Miyuki Sato in the Japanese version, and by Sarah Troyer in the English version.

Patia is a young woman with dark skin and light blonde hair. She wears a black tunic with sliver armor and sliver boots. on her back is a cape which shows a symbol of Alberia and the cape is colored black and purple

Her summer variant wears a black bikini with blue shorts and a white scarf with a gradient peach color. Her hair has several hair clips and a multicolored shades. She wears white bracelets, a bracelet on her right leg, and sandals.

A young woman who serves as Vice Captain of the Kingdom of Alberia's White Sparrow Corps, and the right-hand woman of Captain Leif. She specializes in nimble attacks, but her sense of justice often makes her charge into the fray.

The Vice Captain of the White Sparrows in new beach attire! The great leg strength she cultivated through her work lets her race across white sandy beaches at top speed, so look out, because she's charging into summer at full speed!

Her summer variant uses Sparrow Splash which causes the foe's defense to decrease. Her second skill is Surging Sparrows. It damages her foes in a line and poisons the opponent. 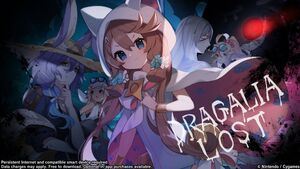 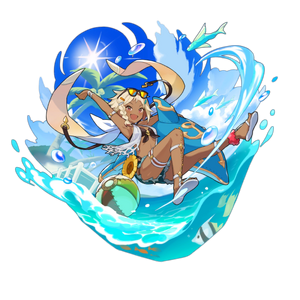