Stop the hooligans from disasters (MSF), clear away the flames (MSF2)

Patricia Wagon, otherwise known as Patty Wagon, is a main heroine featured in Mighty Switch Force series of puzzle platformer video games. In the first appearance, she is a cybernetic law enforcement officer or policewoman from the Planet Land who is responsible for capturing the escaped hooligans and slaying aliens around the urban areas.

Later in the next entry of the series, Patricia became a firefighter instead of a police officer and teams up with the Fire Brigade of Planet Land to save lost hostages including ugly babies and currently reformed hooligans anywhere in the environment from fires that are out of control.

Patricia is all voiced by an actress named Stephanie Komure.

In the original Mighty Switch Force game, Patricia wears a cybernetic police attire and equipped with pellet gun to shoot out extraterrestrial monsters and siren on her helmet to switch the dimensional position of objects in most levels. However, in Mighty Switch Force 2, as a firefighter, she now wears cybernetic fire attire that resembles her previous outfit and armed with a water gun to prepare for performing tasks related to fire incidents. 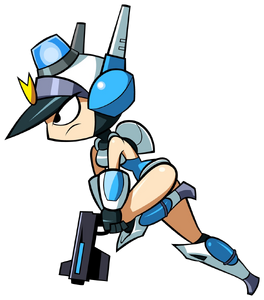 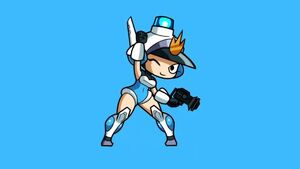 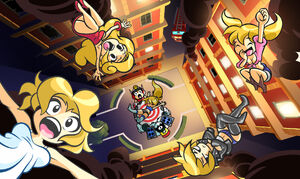 The Hooligan Sisters are falling and Patricia tries to rescue them.
Add a photo to this gallery

Retrieved from "https://hero.fandom.com/wiki/Patricia_Wagon?oldid=1861291"
Community content is available under CC-BY-SA unless otherwise noted.