Looking after her father

Patricia Whitmore is the daughter of Thomas Whitmore and Marilyn Whitmore and the fiancée of Jake Morrison. She is a supporting character in the original 1996 movie, but in the sequel, she is the tritagonist.

She is potrayed by Mae Whitman in the original 1996 movie, and Maika Monroe in the sequel. Whitman also voiced Leslie Dunkling in Teacher's Pet, and Tinker Bell in the animated films, as Monroe also played Jay Height in It Follows.

Patricia was born in 1990 to Thomas and Marilyn Whitmore. Patricia was in Washington, D.C. with her father while her mother was away in Los Angeles. During the War of 1996, she and her father were evacuated from the capital and eventually arriving to Area 51. Patricia was reunited with her mother, who was gravely wounded in the aftermath of Los Angeles' destruction. However, Marilyn was dying from internal bleeding in which Thomas chose not to alarm their daughter. After Marilyn succumbed to her injuries, Patricia asked her father if "mommy is sleeping now." Thomas sadly replies with "Yes, mommy is sleeping now" in which her reaction tells she knows exactly what this means.

Ten years after the war, Patricia befriended Dylan Hiller and attended a STEP school for fighter pilots in Nevada. There she meets Jake Morrison, an orphan and pilot. The two fall in love and shared a mutual bond. However, their relationship often gets in the way of each other's careers.

In 2013, Patricia was enlisted in the ESD Academy but resigned due to taking full responsibility of taking care of her father, who is suffering from mental illness. However, she maintains her ties to the ESD while becoming an aide to President Elizabeth Lanford.

In 2016, life is back to normal but Earth has made many changes to the world by using the alien technology they found. Patricia was engaged to Jake Morrison as they found peace. Patricia also gets to hang out with America's new female president and become a pilot in the ESD. When the aliens arrived she had to save her dad from a psychic attack in which she tries to get the Legacy Squadron out of the Queens ship but was too late. Jake told Patricia that he loved her and only 7% of the attack force made it back to Area 51. Patricia wants to go on the tug to lure the queen into a trap but her dad got away doing it.

Patricia lead what is left of the squadron and after Whitmore sacrificed himself Patricia lead her fighters into killing the queen but was wiped out with only Patricia as the survivor. Luckily Dylan and Jake hijacked some fighters and killed the queen just as the queen took the sphere. After the queens death and her fighters stopped attacking Patricia almost shot Jake just because she mistook him for an alien coming out of the fighter and then hugged Jake. 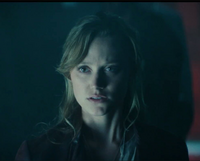 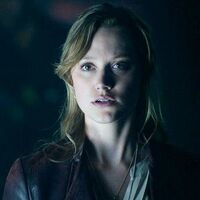 Patricia tries to stop her father.