To kill Red John and avenge his family's death.

Patrick Jane is the protagonist of the TV show The Mentalist. He is a consultant of the California Bureau of Investigation (CBI). He specializes in realizing if someone is telling the truth or lying and really is smart on how to get people to act or talk. They have dealt with many killers and criminals in general. Patrick Jane and Teresa Lisbon who have been partners for the longest time have captured many criminals including the notorious Red John.

Patrick Jane was born around 1969 to 1974 to conman, Alex Jane and raised as a carney. Growing up, Jane 's father verbally abuses his son. Though not ever stated, Patrick probably spent some of his childhood into the foster system. One time, Alex plays a big scam where he forces Jane to pretend to use a crystal with supposed healing properties for a grandmother and her ailing granddaughter. Eventually, Patrick meets his future wife, Angela Ruskin, who both run away after learning their similar backgrounds and leave their carney life behind. They marry and have a daughter named Charlotte.

Through his earlier days, Jane feigned being a psychic. On one of his times working with the police, Jane puts away the criminal known as Don Bowman. ("Ball of Fire").

On one of the talks shows he guest stars on, Patrick insults an infamous serial killer known as Red John, calling him an "ugly little man." In retaliation, red John breaks into the Jane household, where he kills Patrick's wife and their daughter. Returning home, Jane sees a note written by Red John. A very distraught Jane sees Charlotte and Angela brutally murdered and notices red John painted Angela's toenails in her own blood and wrote his signature smiley face on the wall ("Pilot", "Red John's Friends")

The event of Patrick's loss causes Jane to go through a mental break down and incarcerate himself in a psychiatric ward, being treated by Sophie Miller, whom helps Jane get his life back on track. After spending six months in the asylum, Jane is released, but not before telling Sophie that he is grateful for her help. ("Red Dawn", "Red Brick and Ivy"). He later helped solve a case that had been going cold about the murder of a judge's son. After he was able to identify the killer, Patrick was inducted into Teresa Lisbon's team. One of the members, Hannigan, refused to work with Jane and transferred to another organization. Hannigan was later replaced with Grace Van Pelt.

Jane also has a personal history with a man named Jack, and claimed later that he owed him money.

During one of the cold cases, Jane and his team were investigating another case and falsely believed it was Red John. However, studying Red John for years, Jane knows that it is not the serial killer's work. The couples' doctor, Dr. Wagner attempted to kill Patrick in order to cover his tracks, but Jan is saved by Lisbon and their team. A young girl, Melanie, was abducted and tragically killed and realizes that one of her family members, the brother, wants to seek vengeance on the man who hurt his sister. Jane tries one of his other schemes by having Van Pelt smoke out the perp. He and a red head were nearly killed by the chef, Malcolm, and his wife, but Lisbon helps by killing Malcolm and incapacitating his wife. During another case, Jane develops a relationship with the victim's best friend, Nicole, helping her remember what happened the night Kara was killed. Later, Jane develops an attraction to the victim's widow, Jennifer Sands after losing a bet with Rigsby. However, Jane finally sees through Jennifer and knows she was the one who planned the torture and Bennett kidnapped her daughter for this reason.

Later, Red John sets a trap for Patrick, which ultimately failed when he was saved by Lisbon. Instead of finding Red John, they capture one of his followers. However, Patrick shoots Dumar to save her and Maya Plaskett.

Patrick Jane is sometimes defined as a charlatan, often manipulating other people and conning numerous others by pretending to be a psychic before his role as a CBI agent. When Jane was younger, he had something of a conscious, as he was wary of conning a dying girl with his father but still went through with it. The episode, "Fugue in Red," reveals more of a pre-CBI Patrick Jane: he was more of a selfish and amoral. After the death of his wife and daughter, Jane changed into a different person: a person deeply guilt-ridden over his family's death. According to Kimball Cho, he says, "Don't take this the wrong way, but the death of Jane's family made him a better person."

Patrick also has a strong aversion to violence, often hiding behind his colleagues when there are guns involved. Usually when struck with a fist, Jane never retaliates. He had only handled a gun four times. Patrick is camera-shy, usually avoiding times when he is going to be interviewed, shown in episodes like "Bleeding Heart" (an episode of season 2). As of season 6, Jane has killed four men: Dumar Hardy, when he nearly killed Lisbon, Timothy Carter (who was pretending to be Red John), Oscar Cordero (in self-defense), and Red John himself (by shooting him and then strangling him).

Jane also has a good rapport with children due to having a daughter but then ultimately losing her.

Initially, Jane and Lisbon were described as having something of a brother-sister relationship, however, many characters have concluded that they are both a little bit in love with each other. In any given situation, Patrick always chose Teresa before Red John, especially shooting down the man who could lead him to Red John, such as shooting Tanner because he was going to kill Lisbon).

Jane also occasionally helps Lisbon, often helping her. In "Red Badge," Jane offers to help Lisbon remember what happened the night William McTier was murdered, but Teresa doesn't want him in her head. Eventually, Teresa complies and wants Patrick to hypnotize her. Usually, Teresa would actually not want hypnosis. They find the killer by having Lisbon pretending to undergo a nervous breakdown and catch him in the act by remembering a detail only the killer would know.

Patrick and Teresa care deeply for each other. During season six, Jane realized that had genuine feelings for Lisbon, and realizing that when Teresa planned on leaving for DC. To prevent Teresa from leaving, Patrick creates a note that expresses a murderer may want to try it again. She and Jane both go to Miami, talking to Wesley Baxter, biggest suspect in the FBI case. At the Blue Bird lodge, Jane reveals he wrote that letter to prevent Teresa from leaving. Infuriated, Teresa throws water at Patrick in anger. However, Patrick goes to apologize to Teresa and confesses he is in love with her before being dragged away by the security at the airport. Moved by what Patrick told her and realizing that she loves him back, Teresa joins him at the TSA holding room, and asks if he means what he said, Jane proclaims he does. Teresa realizes she feels the same way, and the two of them slowly kiss, while being reprimanded by the TSA agent to cut it. Thus, the two engage in a relationship. Per Lisbon's request, they keep their relationship as lovers from their colleagues. They eventually marry in the series finale, with Teresa revealing she is pregnant with hers and Patrick's first child.

Jane insulted the serial killer, Red John, on TV, which caused the serial killer to retaliate by killing Patrick's first wife, Angela, and their daughter, Charlotte. According to one of the adversaries, Brett Stiles, Red John enjoys sparring with Jane and sees him as a worthy adversary. Patrick and Red John first meet face to face in the season 2 finale, were the serial killer saves Jane from three students who were going to kill him. However, Red John was in a rubber, murder mask but he had also abducted Kristina Frye.

At the end of the third season finale, Jane meets a man whom he believes is Red John. During their conversation, "Red John" encourages Jane to forget about him, and says that seeking vengeance is a waste of his valuable life. Patrick asks if he is the real Red John, to which the man gives detailed comments about Patrick's wife and daughter. When "Red John" attempts to walk away after their brief talk, Jane shoots him with a handgun, then sits down and waits to be arrested. It is revealed in season 4 that the man Jane shot was an imposter, and Red John remains at large. 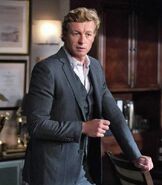 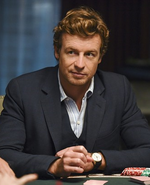 Add a photo to this gallery
Retrieved from "https://hero.fandom.com/wiki/Patrick_Jane?oldid=2240282"
Community content is available under CC-BY-SA unless otherwise noted.