Working at LAPD
Taking down criminals

Help the LAPD take down Mossi Kasic, Detective Brolin including their crew, avenge the deaths of the people that Mossi killed and become the sergeant (all succeeded)

Friend of a Villain

Patrol Officer Segars is tritagonist of the 2014 movie, Let's Be Cops.

He is portrayed by Rob Riggle. 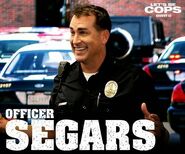 Segars shoots at Mossi and his crew.

Segars gets a bit of help from Justin & Ryan.

Segars along with the SWAT.
Add a photo to this gallery
Retrieved from "https://hero.fandom.com/wiki/Patrol_Officer_Segars?oldid=1927688"
Community content is available under CC-BY-SA unless otherwise noted.