Going on adventures, dreaming about and flirting with Lazlo

To be with Lazlo

In-Love Mongoose
Patricia “Patsy” Smiles is a recurring character from Camp Lazlo. She is a mongoose scout from Acorn Flats with a huge crush on Lazlo.

She and Miss Jane Doe are both voiced by Jodi Benson who did Ariel from Disney's The Little Mermaid, Barbie from Toy Story movies, Thumbelina, Weebo, and PJ Sparkles.

Patsy is the daughter of Commander Hoo-Ha, the superintendent of both Camp Kidney and Acorn Flats.

Patsy is an mongoose with pink hair. She wears the traditional Squirrel Scouts uniform, consisting of an aqua shirt with a teal collar, a red vest, and brown shoes. She also wears a matching teal beret.

Being a Squirrel Scout living in the wilderness of Prickley Pines, is no surprise that Patsy is very adventurous, and is easily seen as a tomboy. She is often the primary Squirrel Scout who strays away from her camp to go on adventures, and is not afraid of getting herself in danger.

Throughout the series, she is shown to have an obvious crush on Lazlo, who usually doesn't requite her feelings, and when he notices, often becomes uncomfortable. Nonetheless she always tries to impress him and protects her relationship in anyway possible, even going as far as freaking him out or unintentionally harming him.

In “Spacemates”, it is confirmed that she and Lazlo are destined as soulmates, implying that in the future, they will likely end up getting married. 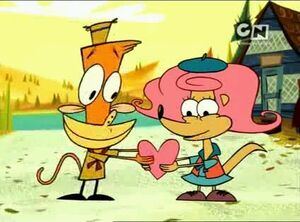 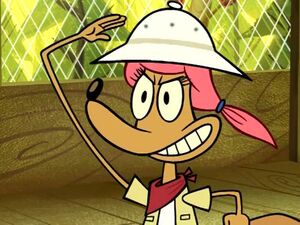 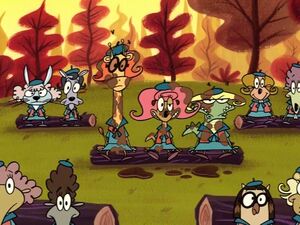