Hellcat (real name Patricia "Patsy" Walker) is a fictional character and superheroine from Marvel comics, was a member of the Defenders and later the Avengers, and close friends with fellow superheroes She-Hulk and Firestar.

She was originally famous after her mother created a fictionalized version of Patsy in comic books, and became a model and actress. Despite her popularity, Patsy idolized heroes, and wished to become a superheroine, and achieved her goal after coming into the possession of a cat suit that was owned by Greer Nelson.

She was created by Ruth Atkinson, Stuart Little, Steve Englehart and George Pérez, and first appeared in Miss America Magazine #2.

In the Marvel Cinematic Universe, she was portrayed by Rachael Taylor.

Patricia Walker was born in Centerville, California to Joshua Walker and comic book writer Dorothy Walker, and is the sister to Mickey Walker. Dorothy acted as Patsy's agent when she was a child, helping her daughter become a model and actress in commercial work. Patsy attended a unnamed high school in her youth, and became childhood friends with Robert "Buzz" Baxter and Hedy Wolfe, who became her rival (and often frenemy). Eventually, Dorothy created a comic book named after Patsy, which featured romantic adventures of her daughter and her real life friends as teenagers.

The comic book series became popular, but Patsy felt strange about her mother's fictionalized exploitation of her, and was relived when the series ceased publication after running for over a decade. Patsy was exposed to comic books due to her mother's profession, and she grew up to idolize the heroes her mother's colleagues wrote about. Patsy dreamed of becoming a hero, and eventually developed a crush on Reed Richards, better known as Mr. Fantastic from the Fantastic Four.

After graduating from high school, Patsy left her daydream and married Buzz, who was in the officers training program of the U.S. Air Force at the time. Due to him being in the program, Patsy had to spend the next several years on a number of Air Forces bases.

While Buzz was assigned to a security post for the Brand Corporation in New Jersey, Patsy met X-Men member Beast, and learned of his secret identity. Patsy elicited a promise from Beast that in exchange for keeping his identity secret, he would help her become a "superhero" due to idolizing them since she was a child. Her marriage with Buzz eventually ended bitterly, leading to a divorce, and Patsy decided to seek out Beast to keep his promise.

Beast, now a member of the Avengers, decided to allow Patsy to tag along with him and the other members to investigate criminal activities at the Brand Corporation. She was imprisoned alongside the heroes by the corporation and Buzz, but they managed to free themselves. Patsy discovered the cat suit worn by Greer Nelson in her identity as the "Cat", and decided to put on the costume to become a superhero. Patsy dubbed herself the "Hellcat", and used her athletic abilities to help the Avengers, and desired to become a member of the team.

Though she wanted to join the Avengers, Hellcat was persuaded by Moondragon, the priestess of Titan to accompany her there to undergo training. During her stay on Titan, Patsy's minor psionic potential was artificially enhanced by electronic organic devices, and she honed her skills in martial arts after extensive training.

Upon returning to Earth, Patsy met with the Defenders and decided to accept their offer to join rather than the Avengers. Hellcat remained a core member of the team for several years, and became close friends to the Valkyrie and Nighthawk, an also encountered She-Hulk in one of her adventures. Eventually, Patsy met Daimon Hellstrom, who joined the team briefly while guised in his costume of the Son of Satan. Patsy fell in love with Daimon, and he learned this when he was cured of his demonic aspect, and the two decided to marry after Patsy renounced her superhero identity.

The couple married in Greentown, Ohio where her father resided, and several members of the Defenders were invited to the ceremony. The wedding was interrupted by Buzz, who had assumed his guise as Mad Dog and the Mutant Force, and the Defenders repulsed the attack and Daimon subdued Mad-Dog. Patsy and Daimon then moved to San Francisco, and established themselves as occult investigators, and helped several heroes with mystical problems, including the Avengers West Coast. In helping the Avengers, Patsy donned her costume and remained on hand to help them stop Tiger Shark and Whirwlind.

Later on, Hellstrom's dark soul reasserted itself and Hellcat was driven mad at the sight of it, having a near-vegetable state for months. Eventually, the entity Deathurge sensed her despair, and freed her spirit from her body, killing herself and freeing her from madness. Patsy ended up in the realm of the demon Mephiesto, and fought an eternal battle in the Arena of Tainted Souls alongside the Avenger Mockingbird. Months later, Grim Reaper, an enemy of the Avengers, resurrected Hellcat and Mockingbird, but he tainted them with his hatred for the Avengers and set them against the team.

Patsy and the others were reverted to their true personalities by Scarlet Witch, and aided the Avengers against the Grim Reaper before returning from where they came. Before disappearing, Mockingbird was able to send a warning to Hawkeye about a plan Daimon was developing, and he and the Thunderbolts confronted Hellstrom. The team then used their sorcerous connections to go to Hell to restore Mockingbird, but they were tricked by Daimon, and the Thunderbolts rescued Patsy instead, restoring her.

Despite being restored, Pasty became despondent and depressed due to her perceived failures in life and being in Hell. She put on a front to hide her depression, writing a autobiography and began a book tour to keep her mind clear. Afterward, Patsy returned to Centerville to find Hedy had joined with the corporation that was built upon the Patsy comics, and turned their hometown into a tourist attraction. In addition, Patsy learned that the town was infiltrated with demonic forces, which were led by the warlock Nicholas Scratch.

Scratch had allowed a cult named the Sons of the Serpent to use the citizens for their occult purposes, and Patsy resumed her superhero identity and alerted the Avengers, and defeated Scratch. Patsy later uncovered a plot by Dormammu to take over various dimensions of Hell, each led by a different demon, among them were Mephisto, Hellstrom and Satannish the Supreme. Hellcat helped Mephisto thwart Dormmau by uniting the demons alongside the death gods Hela and Pluto. In addition, Patsy revealed Daimon's father was actually Satannish, a pawn of Dormammu, and Patsy proved to Mephisto that she would be better serve to have on Earth. After the adventure, Patsy became more determined and dedicated to continue her superhero career.

Patsy's superpowers are her psychic powers. Aside from wearing costume with claws and grappling-hook, her fighting abilities are natural.

She once possessed enhanced psionic abilities, due to the mental stimulation of Moondragon's Titanian technology. She could move small objects telekinetically, resist mental control, and on one occasion was able to generate a psychokinetic force-blast. 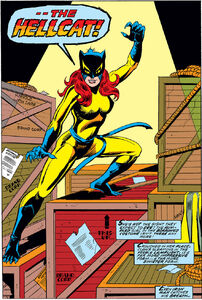 Patsy's first appearance as the Hellcat. 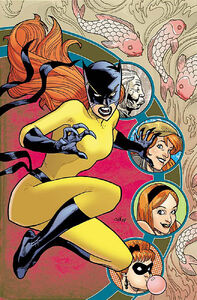 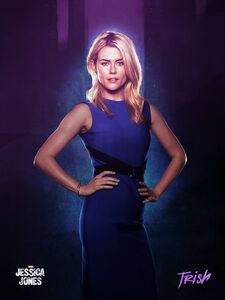 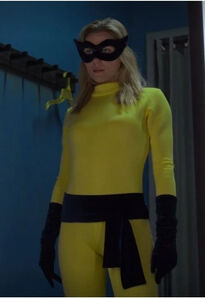