Paul Holt is the deuteragonist in the film Friday the 13th Part 2 and the boyfriend of Ginny Field.

Paul, having worked at various summer camps throughout the country, opens a counselor training centre in the Camp Crystal Lake-adjacent Packanack Lodge in the summer of 1984. During the orientation meeting with the in-training counselors, Paul has his speech interrupted by his assistant Ginny Field, who arrives late. Taking Ginny into his office, Paul, after telling Ginny he was worried about her and after she apologizes for her lateness, sends her off to park her car with the counselors. Shortly after returning to the counselors to deliver his speech, Paul, noticing Ginny is having trouble getting her car to go, comes to aid and fixes it, getting a face full of exhaust in the process.

Several hours after the orientation meeting, Paul holds a campfire meeting and tells Ginny and the others about the bloody history of the nearby Camp Crystal Lake, where Pamela Voorhees had gone on a killing spree five years ago as revenge for her son Jason drowning in the lake. After telling the counselors about how Pamela's killer, Alice Hardy, had disappeared two months after surviving Pamela, and about how Jason may still be out there, Paul has Ted, wearing a monster mask and brandishing a spear, jump out of the bushes to scare everyone. After the prank, Paul tells everyone that Jason is dead. After the campfire, Paul, as the others party in the main cabin, plays chess with Ginny and winds up losing. As Ginny leaves to go to bed, Paul follows her back to her cabin and have sex, unaware that local eccentric Ralph is being murdered by Jason just outside. In the morning, Paul gets up early and leaves, leaving "Beware of Bears" scrawled on Ginny's mirror.

During training exercises, two counselors, Sandra and her boyfriend Jeff, are found prowling around the off-limits Camp Crystal Lake by Deputy Winslow. When Winslow brings the two teenagers back to the Packanack Lodge, Paul has a meeting with the officer, who advises Paul pack up and leave and start his training center somewhere else, as things have been quiet at Crystal Lake for the last five years. Ignoring Winslow's suggestion, Paul, after the deputy asks if he even intends to punish Sandra and Jeff for trespassing, tells the recently arrived Ginny to make sure Sandra and Jeff don't get seconds for dessert.

After the incident with Winslow, Paul, during the night, goes into town with Ginny and several others for one last night of fun in the bar. While drinking with Ginny and Ted.

Paul listens to Ginny as she tells her theory that Jason could still be out there, living in the woods as some kind of wild man. Bemused by Ginny's rambling, Paul reassures her that Jason is just legend.

Eventually, as the hours wear on, Paul and Ginny head back to the Packanack Lodge and find the place empty. Looking around, Paul and Ginny, after finding a large amount of blood in the upstairs bedroom of the main cabin, go downstairs when the power abruptly goes out. Warned by Ginny just in time, Paul avoids being skewered by the spear wielding Jason, who had leapt from the shadows. Fighting Jason, Paul is knocked out by the hulking killer, who leaves him to go after Ginny.

Regaining conscious sometime later, Paul tracks Ginny and Jason down to the killer's ramshackle cabin in the woods. Attacking Jason, Paul distracts Jason long enough for Ginny to strike the killer in the shoulder with a machete, seemingly killing him. With Jason lying unmoving, Paul and Ginny, before leaving, take the sack Jason was wearing off and see his horribly disfigured face.

Carrying the wounded Ginny back to the Packanack Lodge, Paul brings her into the main cabin and sets about tending to her injured leg when a noise outside attracts his and Ginny's attention. While Ginny's grabs a pitchfork, Paul, arming himself with a shovel, opens the front door and is relieved to find the noises outside had simply been made by Muffin, the pet dog of Terry, one of the counselors. When Muffin walks to Ginny, Jason suddenly comes crashing through the window behind Ginny and grabs her. The next morning, a disoriented Ginny, who had blacked out, is brought out of Packanack by paramedics, but Paul and Jason are nowhere to be found.[1] Rumors say that Paul survived and is probably safe at home, laying low. Though no proof is given, to support the rumors. Since Ginny had blacked out during the last attempt, Paul may have fought off Jason to prevent him from killing Ginny. Depending on who had the upper hand Paul could have fought off Jason enough to run away afterwards, or was killed defending Ginny and his body was taken by Jason.

Paul's fate was more explained in an interview with Peter Bracke, author of Crystal Lake Memories: The Complete History of Friday the 13th, in the Friday the 13th Part II DVD features. There he reveals that there was an unused ending in the movie. After Ginny questions where Paul is, the scene switches to Mrs. Voorhees' head, which  opens its eyes and smiles, indicating that Jason had killed Paul. But when they filmed it, they thought it looked too silly. So it was taken out of the movie. 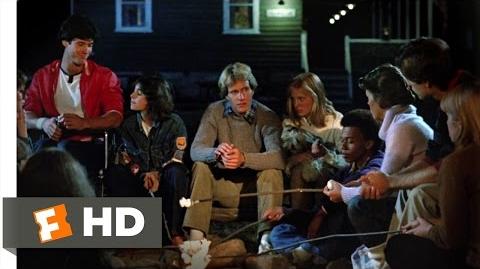 Retrieved from "https://hero.fandom.com/wiki/Paul_Holt?oldid=1491920"
Community content is available under CC-BY-SA unless otherwise noted.