Heroes Wiki
Register
Don't have an account?
Sign In
Advertisement
in: One Piece Heroes, Male, Damsels,
and 19 more

Paulie is a major supporting character in the anime and manga series, One Piece. He is a vice president at the Galley-La Company at Water 7 Arc, he was an ally of the Straw Hat Pirates before the end of the Water 7 Arc, he was he was one of the five Dock One foremen in rigging, knots, and masts. In the end, he was start at the beginning at the Enies Lobby Arc.

Paulie who often seen with a cigar in his mouth. He wears a denim jacket has a flame detail, his cigars strapped to it (in a similar fashion to Smoker), and his back jacket who has a big number one who painted on it. Most referring to Dock 1 (though in the Post-Enies Lobby Arc, he was wearing a black jacket emblazoned with roses and chains).

His hair are yellow and slicked back on his head while wearing a pair of orange goggles on top. His googles were cracked on the right side for the second half of the Water 7 arc and the during of the Enies Lobby arc as a result of his fight with Rob Lucci and Kaku. He wears a quite muscular, and his attire is completed by a yellow T-shirt, with white concentric circles in the middle of it, a belt around his waist with a little bag attached to it, and a pair of loose trousers tucked inside his boots.

At the appearance in the Where They Are Now?, he wears an elegant, unbuttoned jacket over a cloud-patterned shirt, with a loose tie around the unbuttoned collar, and matching suit trousers. He still had his trademark goggles, belt and cigars strapped to his jacket, and a hammer and a small purse were attached to his belt.

Paulie is the closest friendly of Iceburg, caring and hearted-man. He shows outlook on the way many female characters dress most other male characters such as Sanji. Paulie becomes an outraged like show how much bodies such as Nami, Kalifa and Mozu and Kiwi.

He show off apparently enjoys gambling, as he has many debts to pay off and is often pursued by debt-collectors. He tries to steal the suitcases full of money from Luffy to pay off his gambling debts. He was treated by Lucci pulling back on land by his ear and gives back the suitcases, he often ten dollars of the cash if Luffy wanna ask him to thank him, before Lucci knocked over the head on his hammer. 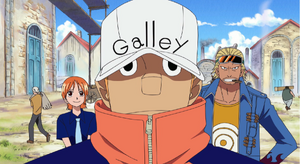