Laputa: Castle of the Sky

Find Laputa so to prove that his dad was right.

Save Sheeta from the grasp of the government (succeeded).

Pazu is one of the main protagonists in the 1986 animated Studio Ghibli film, Castle in the Sky.

Pazu is a young boy who works as an engineer's apprentice. He looks up to his boss as a father figure because his real father died while trying to prove that Laputa was real after he successfully took a picture of the floating island. Pazu gave up on correcting his decrease father after Muska manipulates Sheeta to betray him in order to save him from military harm. This was painful, but allowed for positive character growth since it allowed him to let go of that obsession of proving that Laputa is real and become more concerned with saving Sheeta, and later on, was just as concerned with finding it for the sake of keeping its power out of the wrong hands.

It is unknown, however, what happened to his mother. It is he who saves Sheeta when she falls from the sky. He takes her back home, and learns about her problem. It may or may not be true that he has a crush on Sheeta, and Sheeta may return those feelings of love. Together, along with the Dola clan of pirates, they managed to find Laputa. Sheeta and Pazu, in the end, say the forbidden curse words that Sheeta's grandmother taught her, to destroy Laputa and save it from the evil hands of Muska.

They are miraculously saved by tree roots, and are last seen reuniting with Dola and the sky pirates before heading off their separate ways.

Pazu is a young boy with brown hair and apparently black or brown eyes. He is seen with a yellowish brown hat, and sometimes wears goggles. 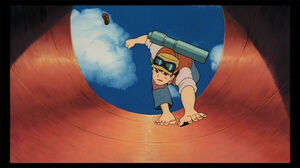 Pazu climbs up a hole and throws his shoes away so he can do it more efficiently.. 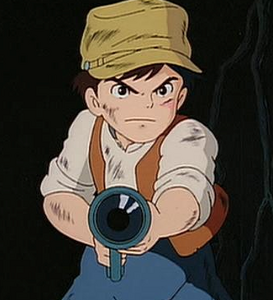