The most extreme gamer of all time
Scaredy Pear

Pear is the deuteragonist of the Annoying Orange series.

He is played by the series' creator, Dane Boedigheimer who also played Annoying Orange, Midget Apple and Marshmallow. He is a Williams pear who inhabits the same kitchen counter as Orange who is too annoying for him, his best friend and occasional rival. He is has his own show called Pear's Extreme Challenges. Orange's best friend, even though he usually doesn't want to admit it (however, he had admitted it in Orange Goes Hollywood and My Name is Orange, and almost admits it in The Fruitrix). Pear simply began as a minor character that was annoyed by Orange as much as Apple, and became disappointed when Orange began to annoy him.

Pear is often the voice of reason in the kitchen. He usually stays calm in difficult situations, has an easygoing nature, and rarely insults anybody. Pear is good at socializing, which has helped him make friends in the kitchen. It is also shown that he is just about always acting and being serious. At times he can be a bit of a social "loser", (which was stated in Wishful Thinking that without Orange he would have no social skills or friends). In Deviled Egg, his heart's desire that he requests is a book called "How to Make New Friends". 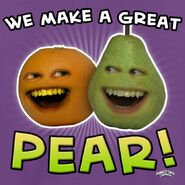 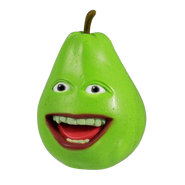 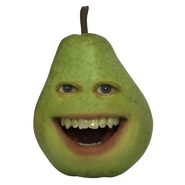 pear live action
Add a photo to this gallery

Retrieved from "https://hero.fandom.com/wiki/Pear?oldid=2258211"
Community content is available under CC-BY-SA unless otherwise noted.