A member of the Crystal Gems

Pearl has a thin, bird-like body and pale white skin with a greenish tint. Her short hair is a pastel orange and is styled to a point at the back of her head. She has large blue eyes and a pointed nose. She wears a light blue top with a yellow star and pale pink shorts under an iridescent blue and green skirt. Her shoes are pastel green with lime green socks. Her gem stone is a large pearl embedded in her forehead. After her regeneration in "Steven The Sword Fighter", Pearl now wears a cyan tunic with a big yellow star in the front along with a turqouise sash tied around her wast with pale orange shorts, pink socks and cyan shoes.

Pearl is a perfectionist, even going through all the trouble to organize Amethyst's room. She puts a lot of thought and reason into her plans and actions. Though she is very graceful and controlled, she sometimes gets flustered when plans are messed up, or when Amethyst says something she doesn't think Steven should hear. She is very caring and motherly that way. She is also supportive.

All Gems have the ability to summon a weapon, retreat to her gem to heal, and shapeshift. Her weapon is a spear, which she pulls out of the gemstone on her forehead. She is also able to project holographic images from her gem. In "Watermelon Steven", it's shown that Pearl to have the ability of psammokinesis (sand manipulation), as well as having the ability of shooting an energy blast of light from her spear.

Pearl's old outfit before her regeneration 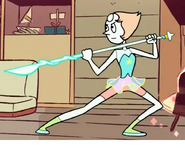 Pearl standing up against Sugilite 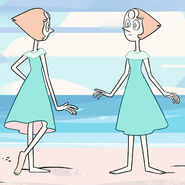 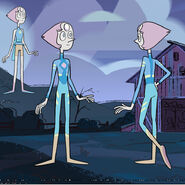 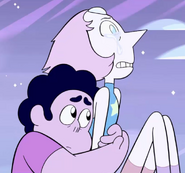 Pearl mourning Rose Quartz, over a decade after her leave.

Pearl when she was young.

Pearl and Rose in The Gem War

Retrieved from "https://hero.fandom.com/wiki/Pearl_(Steven_Universe)?oldid=488940"
Community content is available under CC-BY-SA unless otherwise noted.