Pearlie in the Park

Throwing parties and other events.

Pearlie is the titular protagonist of the book and television series of the same name. She is a park fairy who was appointed by Fairy HQ to help keep Jubilee Park clean and out of trouble whilst avoiding it from falling into the hands of her evil cousin Saphira.

She is voiced by Marieve Herington, who also voices Tilly Green.

At the age of 15, Pearlie was appointed by the Fairy HQ (headed by her Great Aunt Garnet) to help maintain Jubilee Park by keeping it clean whilst avoiding contact with humans (referred to as "big people" by the fairies and elves).

Unbeknownst to her, her evil cousin Saphira becomes jealous of her position and popularity in the park and wishes to rid Pearlie of her status so that she can bask in the attention Pearlie receives.

Pearlie's most distinctive feature is her long, wavy platinum blonde hair, which reaches all the way down to her legs and has light blue highlights. She has green eyes and freckles and wears pink lipstick (which is absent in the books). Being a fairy, she has a pair of dragonfly-esque wings and pointed ears.

Her primary outfit consists of a pink, frilled shirt, blue pants, and purple heeled boots. She wears a headband or tiara that is decorated with with pearls, hence her name.

Pearlie is very optimistic and extroverted. She often views problems as hurdles that can always be accomplished in one way or another, and cares a lot about her friends and family (including her cousin Saphira). She is well-meaning, but also loves to have fun, though she often goes overboard with throwing parties. She also loves to sing and dance.

Pearlie however is strongly implied to be a poor judge of character, largely unaware that her cousin Saphira is jealous of her and wishes to have her fired from her job, often thinking that Saphira is just helping her out. Despite this, her best friends Jasper and Opal are well aware of Saphira's true intentions. 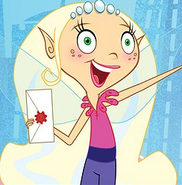 Add a photo to this gallery
Retrieved from "https://hero.fandom.com/wiki/Pearlie?oldid=1861433"
Community content is available under CC-BY-SA unless otherwise noted.