Some of Bonnie's toys

Being played with by Bonnie Anderson

After Bonnie stops playing with him in her bedroom, Woody notices them, and one of them asks him if he's actually a cowboy, but he gets a chance to answer, another one says he can't be as he doesn't have a cowboy hat, making Woody realize that he's lost his hat.

In one of the scenes shown during the film's credits, the Peas-in-a-Pod go inside Mr. Potato Head's body and cause some of his parts to come off, and he angrily tells them "Stay out of my butt!" as they bounce away while laughing at their own antics.

In this short, the Peas-in-a-Pod appear twice, first briefly when Woody announces that Bonnie has gone on winter vacation, and the second time when they warn the other toys that Bonnie has returned.

The Peas-in-a-Pod don't appear physiyscally in this short, but a drawing of them can be seen on Bonnie's wall.

The Peas-in-a-Pod appear with Bonnie's other toys around a board game made by Hamm that is meant to tell them the events of Toy Story 3. 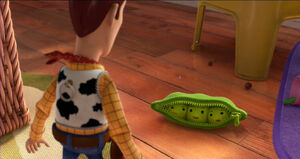 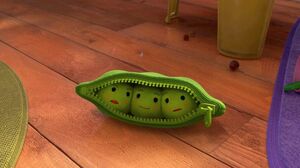