Note: This article is about Peashooter, for the Plant Hero counterpart, see Green Shadow.

Defend the Players from the Zombies

The Peashooter is one of the main protagonists of the Plants vs. Zombies franchise. He is the primary attacking plant that can shoot peas at zombies.

The Peashooter first appeared in the first level of Day. The game instructed the players to collect 100 suns to plant him and defend themselves from incoming zombies.

He also appeared as a minor character in Zombies on Your Lawn music video.

He also can be first obtained in Plants vs. Zombies 2. When Plant Food is used, he can shoot a huge wave of peas at all zombies in front of him for a short time. He is in Appease-mint's family, a family of strait shooting plants.

In Plants vs. Zombies: Garden Warfare and its sequels as one of the playable characters on the Plants' side. His primary weapon is Pea Canon.

A spawnable plant with a similar appearance, Pea Cannon, can be planted in a pot to support the players defending their gardens. His primary weapon is also the Pea Cannon, which behaves similar to the Peashooter's.

In this game, Peashooter is a Basic - Common Pea Plant Card. He costs 1. When attack, he shoots pea at the enemy. He was first obtained in the tutorial of the game.

After the malfunction of the Hero-Tron 5000, the Peashooter became Green Shadow, one of the Plants Heroes.

The Peashooter returned in this game as a common shooter plant. His functions remained the same, as well as his plant food. When upgraded with a taco, he transforms into a Repeater, which shoots two peas instead of one.

Peashooter, Sunflower, Wall-nut, Bonk Choy, Crazy Dave, and Penny ventured through Neighborville to obtain the Solar Sunglasses for the Sunflower. Their task is to find the Magic Beans to open the vault with their magic words. They also encountered Brainiacs in the way, but they managed to defeat the flawlessly. But before Sunflower could obtain the sunglasses, Dr. Zomboss stole it and decided to use it for his evil scheme. But before he could harm Sunflower, the Magic Beans sacrificed themselves to stop him from his plans. Zomboss then retreated, and Peashooter with his crews prepared themselves for the second part of Zomboss's scheme.

Ice Pea is a Rare frozen Peashooter whose Ice Pea Cannon chills and freezes enemies in his way.

Toxic Pea is a Rare (Super Rare in Garden Warfare 2) radioactive Peashooter that emits toxic radiation to enemies close to him and damages enemies with the Toxic Pea Cannon.

Commando Pea is a Super Rare (Rare in Garden Warfare 2) militaristic Peashooter that his Full-Auto Pea is a rapid-fire pea shooting weapon.

Agent Pea is a Super Rare (Rare in Garden Warfare 2) Peashooter agent that his Pea Silencer fires fast, high-damaging, and precisive shots at his enemies.

Law Pea is a Rare Peashooter sheriff whose Six Shooter fires six ammos that are as fast as how fast the players press the firing button.

Berry Shooter is a promotional Peashooter variant for the sponsored products of Aquafina FlavorSplash flavored drinks. His primary weapon is the Berry Blast, which shoots slow but high splash-damaging projectiles at his opponents.

Plasma Pea is a Rare plasmic Peashooter variant who fires the charging shots of his Plasmic Disruptor.

Rock Pea is a Rare Peashooter variant of Garden Warfare 2. His Rock Shot has similar manners to the Berry Shooter's Berry Blast. But unlike him, his bulky rock body provides him extra health in exchange for a slower speed.

Electro Pea is a Super Rare Peashooter variant of Garden Warfare 2. His primary weapon, the Electro Cannon, is an electrical manual detonator that explodes on the second time the players press the firing button.

The Peawitched is a Halloween themed Pea Cannon Variant that has no differences except for its costume.

The Elf Pea is another Pea Cannon's variant that has no differences except for his Christmas costume.

He appeared as one of the supporting character in the comics that helps Nate Timeley and Patrice Blazing fighting the zombies.

Plants vs. Zombies vs. Jay and Silent Bob

The Peashooters appeared in the Pilot Episode Zombies in New Jersey!?, as Silent Bob used them to attack the Zombies outside the shop.

They also made cameos in episode 3, The Epic Conclusion.

He appeared as an Easter Egg in the Crew Quarters of the Tempest. 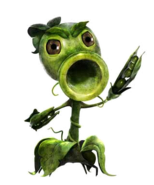 A render of Peashooter.

Peashooter in Plants vs. Zombies Adventures. 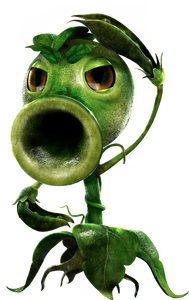 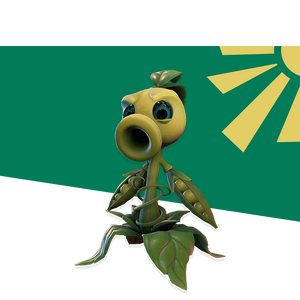 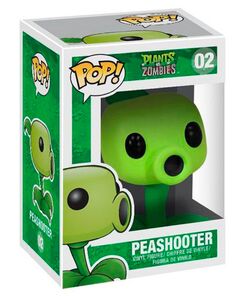 Specific to his variants