Canine Hero
Peek is one of the supporting characters of Cats & Dogs and Cats & Dogs: Revenge of Kitty Galore.

He is voiced by Joe Pantoliano.

Peek is a Chinese crested dog.

When Butch introduces Lou to his agents Peek, a Chinese Crested Dog, and Sam, an Old English Sheepdog. Realizing Lou is a civilian, Butch raises his concerns to his superiors but is rebuffed. Lou is briefed on the origins of the conflict between cats and dogs, dating back to Ancient Egypt when cats ruled the world. Butch reveals that Buddy has escaped the cats and the spy trade, retiring to a condo in Boca Raton.

Lou, Butch, Sam and Peek receive a video from Mr. Tinkles demanding Charles’ research as a ransom for the Brodys, and dogs around the world assemble at a meeting led by a Mastiff. When the assembly decides not to surrender the formula, Lou confronts Butch. 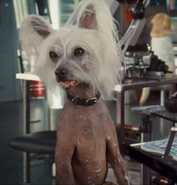 Peek in Cats & Dogs: The Revenge of Kitty Galore.