Pegatrix is the Alicorn Bakugan and the tritagonist who appears in the reboot series Bakugan Battle Planet. She is Lia Venegas' second partner and Gorthion's sidekick, as well as one of the members of The Awesome Ones. She is described as the Queen of Alicorns.

She is voiced by Janice Hawke.

Pegatrix was first seen in Origins of the Species Part 2 when she manages to rescue Drago from being beaten by Nillious, Webam and Fangzor who attempted to strike him down for no reason. Pegatrix becomes Gorthion's sidekick and helps him, Drago, Trox, Howlkor, Hydorous and their friends to protect the Bakugans from thugs who use the Bakugans for malicious purposes.

Pegatrix is a female alicorn who loves to take down The Exit Team, AAnimus and other bad teams who tried to steal everyone's Bakugans for malicious purposes. She partners with Lia Venegas and Gorthion to take down Nillious, Webam and Fangzor who attempted to take down the Awesome Ones.

She is an Haos Bakugan. 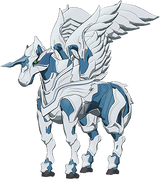 Pegatrix got hit by V Virus 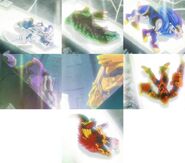 Pegatrix returned under the influence of the V Virus