NOTE: This article is about the incarnation of Peggy Carter from the Marvel Cinematic film series. The mainstream version can be found here: Peggy Carter (Marvel).

She was a British agent during World War II against HYDRA, a founding member of S.H.I.E.L.D., and the first girlfriend of Steve Rogers. She developed Alzheimer's disease in her old age and peacefully passed away in her sleep. Steve eventually reunited with Peggy in an alternate timeline via time-travelling in the 1970s, deciding to take Tony Stark's words of laying down to heart after saving the world from Thanos.

She was portrayed by Hayley Atwell, who also played Evelyn Robin in Christopher Robin. Atwell reprised her voice for a different iteration of the character in the 2021 Disney+ tv series, What If...?

Carter is tough and resilient, standing strong whenever she is mistreated, be it by man or woman. She has a sarcastic streak, and can also become close to a select few people, such as Steve Rogers, Howard Stark, Edwin Jarvis, and a few others. Though she believes in morality, she will lie, if the situation calls for it, including the period when she was hiding her involvement with Howard Stark from the SSR.

A loyal soldier, Carter will do whatever is needed to get the job done, very nearly having Howard Stark shot out of the sky, when he was endangering the city of New York. Such sacrifices wound her; she does not enjoy it. Being somewhat no-nonsense, Carter does not take kindly to messing about during a mission or when there is work to be done. She is also quite clever, always able to work her way out of a pinch at a moment's notice. Though her number of dear friends is slim, she is exceedingly appreciative to those she has.

Peggy grew to love Steve after meeting him; seeing he had equally be discriminated against and used his wit and will to fight back. After clearing up she wasn't dating Howard, Peggy briefly got jealous when a secretary kissed Steve in an attempt to seduce him; believing Steve had lost the heart she knew. After seeing him keep a picture of her in his compass during a review footage of the Howling Commandos against HYDRA, Peggy decided to return his affection and dressed up for a victory party; using his dance partner metaphor to implicate she was ready when he was. Even after the loss of Steve, Peggy held onto her affections for a while; but eventually married someone he rescued from HYDRA in the main timeline. Even when she was senile, Peggy loved Steve visiting her; despite forgetting every few minutes, he always reminded her that he promised Peggy a dance. 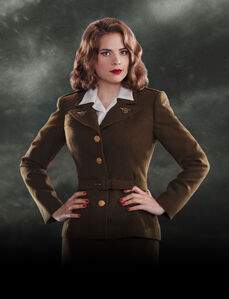 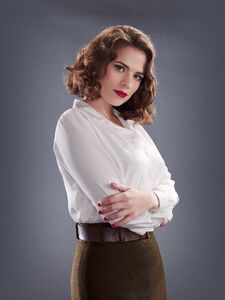 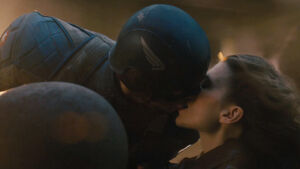 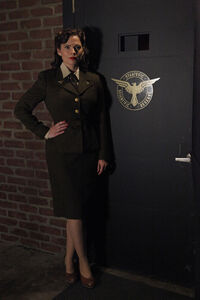 Agent Carter in season two's of Agents of S.H.I.E.L.D. 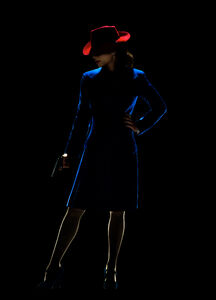 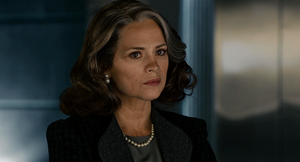 An elder Peggy, reuinting with Steve in Captain America: The Winter Soldier.

Peggy in Steve's hallucination in Avengers: Age of Ultron.

Peggy in Avengers: Endgame in 1970, before a time-travelled Steve enters.

Peggy and Steve finally have their dance.