friend of the hero

Pence is encountered many times by Roxas and Axel through their visit to Twilight Town while attempting to locate Xion. While there Roxas expresses his desire to befriend the trio. While looking for Xion, Axel and Roxas encounter Pence in the underground tunnel where he uses his knowlege of Twilight Town try and help Roxas and Axel find Xion.

Pence appears in a digital Twilight Town, where he is bestfriends with Roxas. In the real Twilight Town, they encounter Sora, Donald and Goofy after they awaken from their year long slumber, the trio reconise Sora is similar to Roxas.

Pence returns with a new outfit alongside Hayner and Olette, they are seen running away from a swarm of Heartless and greet Sora, Donald and Goofy who defeat the Heartless. After Sora and company defeat the heartless, the trio catch up with them. Sora explains they are looking for Roxas. Hayner expresses they have never met Roxas before with Pence suggesting they possibily ran into him somewhere. Goofy however, pulls out a picture of them with Roxas causing Pence to realize they have the same picture but without Roxas. Realizing its the Roxas from the digital Twilight Town, Pence agrees to help Sora track down Roxas by asking around town for Roxas' whereabouts while Sora, Donald and Goofy go to the Old Mansion, before they split up they take a quick group selfie together. They later regroup with Sora, explaining they got no luck in finding him and that the Old Mansion was their last hope. Inside the mansion, Pence come across a computer but is unable to access it. However, Ienzo contacts Sora having noticed that they logged into the other computer set up there. As Ienzo assists Pence in linking up the computer to his computer in Radiant Garden to look for Roxas, Hayner and Olette depart setting up posters for Scrooge McDuck in order to get money for the beach.

Later, Pence was with Hayner and Olette in the woods near the Old Mansion when they watch Ansem the Wise emerge from a dark portal by Ansem, Seeker of Darkness, the heartless of his former apprentice Xehanort, the latter having take the former hostage, the trio overhear Ansem the Wise express regret for what he did to Roxas and Namine. Realizing that Ansem needs their help the trio devise a plan to assist him. Pence grabs their attention, when Xehanort's heartless asks who he is, Pence pretends he is looking for a friend that used to live in the Old Mansion, Ansem tells him to leave since no one leaves there, but Pence begins to walk toward the duo and Xehanort's heartless angrily tells him to get out effectively distracting him, With Ansem's back turned, Olette appears behind Ansem the Wise and directs him away from the Seeker of Darkness. When the Seeker of Darkness realizes what is going on, Hayner appears calling Ansem a "loser" and attempts to kick him in mid-air but his guardian appears and protects him before throwing Hayner to the wall, but at that moment a group of dusks appear, protecting Hayner and surrounding Ansem and his guardian. Hayner was confused on how the dusks protected him but before he can question further, Pence grabs him and tells him to keep moving as the two run off as Ansem is forced to watch them run off.

Hayner and Pence regroup with Olette and Ansem after escaping the Seeker of Darkness, Ansem is astonished to meet the very same kids Roxas was friends with in his virtual world. Greatful that the trio rescued him from his former apprentice, he begins to explain to them all about Roxas when Pence pulls out the photo of them together with Roxas and Hayner is eager to learn about Roxas from him. Suddenly Vexen appears with the four dusks, expressing relief his master is safe. Ansem and the trio realize the he was the one who sent the dusks after Ansem, the trio are frightened when the dusks appear behind him, Vexen express his desire to atone for his past actions.

In the end following Master Xehanort's defeat, the trio appear on top of the Clock Tower and at long last get to befriend Roxas for real, as well as Xion, Lea and Isa and the seven of them sit on top of the clock tower to watch the sunset, they witness Riku arrive in his Gummi Ship and are taken to Destiny Islands to celebrate, finally getting to go to the beach with Roxas and meeting Terra, Aqua, Ventus, King Mickey and Naminé, they are seen creating a sand sculpture on the beach along Donald and Goofy. They are last seen with the others watching Sora sitting with Kairi, being able to spend one last moment before fading away from existence. 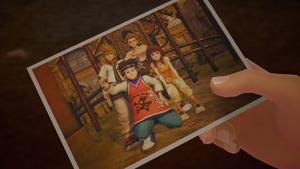 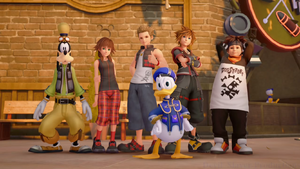 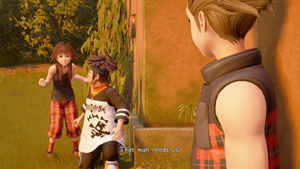 Hayner Pence and Olette planning to rescue Ansem the Wise from Ansem, Seeker of Darkness. 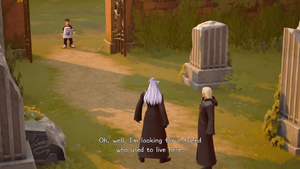 Pence distracting The Seeker of Darkness to allow Olette time to escape with Ansem the Wise. 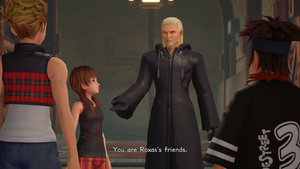 The Trio meeting Ansem the Wise. 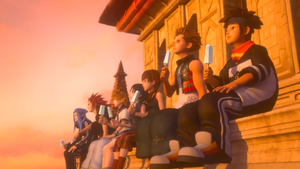