Hypnotist
Member of the Pussycats.

To stay away from Pepé Le Pew.
To help LeBron to find his son.

Penelope Pussycat is one of the main characters of the Looney Tunes series.

She is the love interest of Pepé Le Pew.

She first debuted in the 1949 cartoon title For Scent-imental Reasons, where she purrs towards a panicked man where the friend of this latter flees in fear, she comforts the man by purring on him, she has her first non-speaking role, but she can meow towards a human.

She has the ability to disguise herself as a skunk with white paint, only to flee the citizens who mistake her for a female skunk by saying "Skunk!" or "Le Pew."

She has a french accent in all of the appearences of the show, she was voiced by some of the actors and actress like the late Mel Blanc, June Foray, Julie Bennett, Tress MacNeille and Frank Welker. In 2010, she is currently voiced by Ellen DeGeneres.

Penelope Pussycat is best known as the often bewildered love interest of Looney Tunes' anthropomorphic skunk, Pepé Le Pew. Penelope is a typical black and white pussycat, though by some means or another, she often finds herself with a white stripe down her back, whether painted intentionally or (mostly) by accident.

She often finds herself constantly being chased by the overly enthusiastic Pepé, but Penelope has been portrayed as the pursuer when the occasion has presented itself. For Scent-imental Reasons, Little Beau Pepé, and Really Scent have all shown Penelope to harbor an attraction to Pepé whenever his scent is neutralized (though in each cited instance, extenuating circumstances have caused Pepé to become repulsed by her, inciting Penelope to reverse the roles).

In more recent years, merchandising from Warner Bros (such as ornaments, glass wear, figurines, and children's activity books) has portrayed Penelope and Pepé as mutually attracted "sweethearts", though other modern media (such as The Looney Tunes Show and the current Looney Tunes comic book series) has maintained their classic "chasing" relationship. Carrotblanca featured her in an unusual role as the Ilsa counterpart to Bugs Bunny's Rick, with Sylvester portraying her husband and Le Pew as a minor pursuer.

Penelope Pussycat partly inspired the Tiny Toon Adventures character Furrball, a male cat who sees himself chased by an amorous female skunk (Fifi La Fume) whenever he has a white stripe painted down his back. 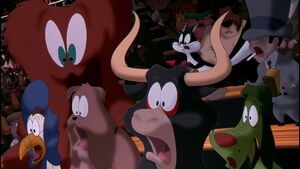 Penelope is shocked upon seeing Bugs being crushed by Pound.

Penelope being passionated by Pepe le Pew and about to kiss him.