Ernest Penfold , more commonly known as just Penfold, is the nervous hamster deuteragonist in the 1981-1992 TV series Danger Mouse and it's 2015 revival. He is voiced by Terry Scott in the original series and Kevin Eldon in the 2015 revival series.

Penfold is Danger Mouse's trusty assistant. He is called "The Jigsaw" because every time he is faced with a problem he goes to pieces. He is an anthromorphic hamster who always wears a blue suit complete with a yellow tie with black stripes.

Penfold is quite cowardly. He never likes going on missions with DM because it often results in him being kidnapped. He often also misinterprets instructions, says the complete opposite of what DM says or talks just plain nonsense which ends up with Danger Mouse saying "Penfold, Shush."

Even though Penfold is selfish and cowardly, he occasionally saves the day and always sticks by DM, whatever the situation.

Penfold was born to his parents in the 1980s or the early 1990s, which is when Colonel K was Danger K at the Danger Agency. His childhood was very different to others, as he seemingly had no friends. Not much else is know about his very early life.

His parents liked spa days, and one day they left him at his Granny's home at Fung Farm. She immediately put him to work on the farm. Shortly after his first few jobs, Penfold realized he was being trained in the art of Farm Fu. His Granny told him about how one day, she believed, he would be worthy to have the Book of Farm Fu. However, Penfold did not realize there were booby traps, and failed to get the book.

Penfold's parents loved to travel. At the age of six Penfold had seen most of Central North West London. It made Penfold happy. Shortly after Penfold learned to talk, his parents abandoned him by the side of the road, or as Penfold remembers it, "accidentally left me by the side of the road and drove off really fast." This was a time of Penfold's love for pencils to really begin, as he showed them his 50 top favourite pencils before he was left. Penfold was adopted by a circus, and they made him part of the elephants act. Penfold found it amazing.

Then, one day, shortly after Penfold had learned the harmonica, they "accidentally" passed him on to a cargo ship with an entire crew of elephants. They put him to work in the boiler room. Strangely, it was the best time of Penfold's life. He then moved on in life to high school.

At high school, Penfold was a nerd. He was bullied by many and, worst of all - had his pencil collection flushed down the toilet. It is because of this that Penfold is now scared of school, and, when he went undercover there, brought lots of pencils. Yet, it was his best friend Danger Mouse who was the ringleader of his bullies.[9] Penfold later accidentally took his teacher's pencil and forgot to give it back. He kept the pencil round the neck and ran off as far as he could and ended up teaching Orphaned trees how to dance in the Amazon. The pencil has haunted him for the rest of his life, but was ultimately destroyed alongside Big Head MK II.

When Penfold and DM split up and grew older, Penfold became an adult and had the idea of a Self-Sharpening Pencil. If all had gone to plan, he would've become the richest and smartest hamster in the world, with lots of yachts. He would've used time machines to travel back in time to go to meetings he didn't go to, alongside his partner, Stiletto. And Danger Mouse would never have had a sidekick, and Danger HQ would be very untidy. This temporarily came true, thanks to Isambard King Kong Brunel, who travelled back in time to stop Danger Mouse from becoming a Danger Agent, but instead made sure he never met Penfold. In the real world, a crocodile Danger Mouse had defeated in the Danger Agency test was flung over the wall and hit the revolving door to the business company Penfold was heading to. He was spun round and ended up in DM's hands when he ran down the last course. DM would only take the job with Penfold. Strangely enough, they all had 1980s hairstyles and yet it was the 2000s. Of course, DM eventually got Penfold back.

Early Days at the Agency

In the early days of the Agency, Penfold was sat on by Colonel K's secretary, Felicity for 48 hours. It made Penfold hate elephants, despite his good history with them. Fortunately, the 48 hours of heat from an elephant made Penfold immune to the Elephant Flu that everyone else had, and allowed him to save the world!

Penfold lives with Danger Mouse (who he calls "Chief") at their headquarters in London in a red Royal Mail Post box and goes on missions with him under the orders of Colonel K. He dislikes going on missions with DM and always makes excuses not to get involved. He especially hates going down the secret lift that goes down to the garage where their car (The Mark III) is kept.

He is sometimes used as a pawn for DM's enemies' schemes such as Baron Silas Greenback using his photographs to brainwash Penfold into an assassin and Dr Crumhorn who kidnapped him and put a lethal robot replica in his place.

His only relative mentioned in the series is his auntie who is always telling him off and refuses to believe that Danger Mouse is a secret agent. 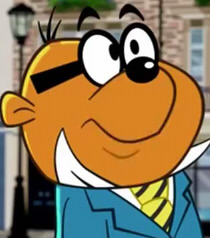 Penfold in the 2015 revival of Danger Mouse 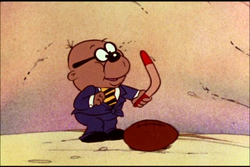 Penfold having an interview 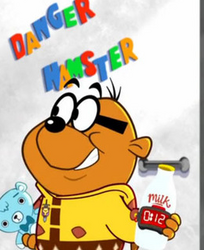 Penfold in his Giraffe Warriors onesie 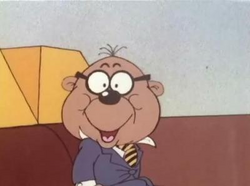 Penfold with his new hat and scarf

Penfold and Danger Mouse in a cave

Penfold as the Blue Flash 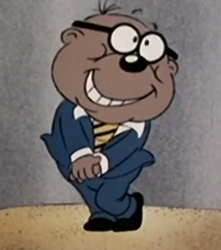 Retrieved from "https://hero.fandom.com/wiki/Penfold_(Danger_Mouse)?oldid=2221740"
Community content is available under CC-BY-SA unless otherwise noted.