Plants vs. Zombies 2: It's about time

Penny is the major tritagonist in Plants vs. Zombies 2: It's about time. She is an intelligent time machine that traveled to the past to help Crazy Dave to re-eat his taco.

She is the time machine that has a RV like appearance. She has a lot of objects on her, such as a radar, an animal skull,etc. She also has a big jet behind her back that helps her be able to fly.

She was first appeared after completing Player's House-Day 5 after Crazy Dave commanded her to re-eat his taco. She traveled back to Ancient Egypt, which began the confusion of Crazy Dave. Dr. Zomboss manipulated the Player to turn against Dave and Penny, she tried to convince the Players and Crazy Dave, but Crazy Dave was too distracted until Frostbite Caves-Day 30. Later on, Dr. Zomboss created the Time Paradoxes to summon zombies from all timelines, and Crazy Dave along with Penny asked the Players and the Plants for help. After Modern Day-Day 34, Dr. Zomboss gave up and gave Dave a taco with a waffle in it. Her goal became succeeded, however, since the game is not over, she introduced new plants to the Players in Premium Plant Quests. Penny's Pursuit is a mode where you have to save crazy dave from roman zombies.

She appeared in Plants vs. Zombies Heroes as minor cameos, or being mentioned.

Plants vs. Zombies: Battle for Neighborville

Penny returned in Battle for Neighborville as the transportation to Town Center.

Penny also returned in the third game of Plants vs. Zombies as the instructor to help the players experience the new way to defend their lawns from zombies.

She appeared in the Comic of Plants vs. Zombies: Timepocalypse along with Nate Timeley and Patrice Blazing . However, unlike the original counterpart, she doesn't have any voiceline.

Plants vs. Zombies vs. Jay and Silent Bob series

She also made an appearance in Plants vs. Zombies vs. Jay and Silent Bob series at the second part What about Silent Bob?. 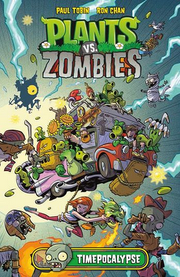 Penny in the cover of Plants vs. Zombies: Timepocalypse.
Add a photo to this gallery

Retrieved from "https://hero.fandom.com/wiki/Penny_(Plants_vs._Zombies)?oldid=2212272"
Community content is available under CC-BY-SA unless otherwise noted.