Her strength
Her speed
High intelligence

Being with her teddy bear.

To be rescued and adopted (succeeded).

Penny is the deuteragonist from Disney's 23rd full-length animated feature film, The Rescuers. She serves as the representation that anyone's dreams can come true if one has enough faith. She is regarded as one of Disney's bravest characters.

Penny was voiced by Michelle Stacy.

Penny is a cute and shy child, but is gutsy and very brave, shown when she stood up to Medusa's crocodiles and eventually to Medusa who was holding her and Mr. Snoops at gunpoint at the time. She desires to go back to the orphanage so that she can be adopted and gain a family but is very insecure about not being liked by any of the families. She is also known to use her teddy bear to express her feelings such as when when she tells Medusa that Teddy "does does not like it down there" ( referring to the cave in Devil's Bayou where Medusa want her to get the diamond.

She has short dirty blonde hair in two pigtails, black eyes, and fair skin. She wears a white polo shirt, blue jumper, torn white underwear from being carried in Brutus's or Nero's mouth, lavender tights, and brown Mary Jane shoes during the day. She is barefoot and wears yellow pajamas at night. She wears a pink hooded winter coat, a light pink scarf, light pink mittens, and dark pink snow galoshes over her regular clothes when she is adopted.

Little is known about Penny's backstory. However, it is known that she was left at Morningside Orphanage in New York City when she was still young.

Since then, she had desperately sought adoption. One night, Rufus, the orphanage's elderly cat, saw the girl sitting sadly on her bedside at the orphanage and asked her what was wrong.

Penny told him that it was adoption day at the orphanage. A man and woman looked at her, but adopted a little redheaded girl instead.

A heartbroken Penny believes that the redhead was more beautiful than herself. Rufus comforts the girl and tells her to have faith through the poem, "Faith is a Bluebird".

Penny feels better and shows her appreciation by giving Rufus some gingersnap cookies. Penny then pets Rufus and carries him downstairs for supper.

Soon after that, the evil treasure huntress Madame Medusa needs a child to fetch a certain diamond hidden within a crack too narrow for adults to fit down.

She thus kidnaps Penny to fetch the diamond for her. Rufus says that Medusa offered to give Penny a ride in her car. For weeks afterward, the police searched for the girl, but had no success in finding her and eventually gave up the search.

When a message in a bottle from Penny finally arrives in New York Harbor, some hobo mice discover it and send it to the Rescue Aid Society of mice.

Miss Bianca and her co-agent Bernard read the message and soon find out that Penny is being held in Devil's Bayou. The two mice set out in search of the girl to rescue her.

With the help of Orville the albatross, the mice soon arrive at the bayou. Meanwhile Penny attempts to escape, as she's done several times, but she is recaptured again by Medusa's crocodiles Brutus and Nero.

She shows no fear of the two, even going so far as to threaten Nero should he get her teddy wet. Brutus carries Penny upside down by the bottom of her underwear back to the riverboat where Mr. Snoops scolds her for running away.

He threatens to feed her teddy bear to Brutus and Nero if she doesn't behave, but Penny retorts that he's too scared of the crocodiles to do so. Mr. Snoops sends Penny to her room for sassing him.

Later in the night, Penny is called in by Medusa after putting her nightgown and her blue slippers on. Medusa tells her that she is willing to let bygones be bygones if she can find the Devil's Eye.

Penny tells her that she is trying her best and asks Medusa if she'll take her back to Morningside Orphanage as she promised.

Medusa asks why she would want to leave and Penny tells her that if she doesn't go back, she'll never be adopted. Then, Medusa says that no one would want "a homely little girl like her."

This brings Penny to tears (one of which she pours on her teddy to make it look like he's crying). With her spirit shattered, Penny goes up to the deck of the boat and looks out to the bayou, still in tears.

While the song "Someone's Waiting For You" plays, Penny looks out to the night sky where she sees deer eating and a star glowing brightly.

This sight puts a smile on Penny's face, signifying that she should keep her hopes as bright as the star. She goes back into her room and prays that someone finds her bottle because "running away isn't working".

Bernard and Miss Bianca talk to Penny in person for the first time ever and explain why they're there.

Penny is delighted to hear they found her bottle, then asks if they brought the police with them. The mice tell her if they work together and have faith, things will turn out right; just as Rufus told her in the orphanage.

Penny and the mice come up with a plan to escape: they will trap Brutus and Nero in the old elevator (which resembles a cage), distract Medusa by setting off Mr. Snoop's fireworks in her bedroom and then steal her swamp mobile to run away.

The next morning, Medusa and Mr. Snoops drag Penny to the underground cave (aka the black hole) to make her search for the diamond.

Penny says she won't do it because her teddy bear doesn't like going down there (most likely referring to herself too). Medusa grabs her teddy bear out of her arms and holds him hostage. Penny tries to grab him back.

Medusa pushes Penny up against the cave's wall and orders her to look for the diamond or she'll never see her teddy bear again.

Penny immediately climbs into the bucket and Mr. Snoops lowers her down. Luckily, Bernard and Miss Bianca hide in her dress pocket to help her.

Once they hit the bottom, Penny tells the mice it used to be a pirate's cave by showing them a skeleton of a pirate with a sword.

She also shows them the hole where the tide comes in and admits she's afraid to go over there. Bernard and Miss Bianca investigate while Penny holds the lantern for them on the other side.

They find the Devil's Eye trapped in a human skull, but can't get it out because it's too big. Soon the cave starts to fill up with water and Penny begs Medusa to pull her back up, but Medusa refuses until she gets the diamond.

Penny grabs the pirate sword and successfully uses it to pry open the skull's mouth to get the Devil's Eye. Penny saves Bernard and Miss Bianca from drowning in a whirlpool, climbs back into the bucket and is pulled out.

Medusa and Mr. Snoops argue over the Devil's Eye while Brutus carries Penny to the riverboat upside down by her underwear again.

Medusa intends to take the diamond for herself and threatens to shoot Penny and Snoops if they follow her.

However, thanks to the assistance of Ellie May and the rest of the swamp gang, Penny makes it to the swamp mobile with her teddy bear and the Devil's Eye.

The swamp gang set off the fireworks and trap Brutus and Nero according to plan while Penny starts the vehicle. Penny manages to speed away with everyone in tow despite some resistance from Medusa.

After making it back to New York, Penny turns the Devil's Eye over to the Smithsonian Institute. The news covers not only this, but Penny being adopted by her new mother and father soon after.

As Bernard and Bianca watch the broadcast, Penny happily waves and greets them from the TV much to the bewilderment of the reporter. 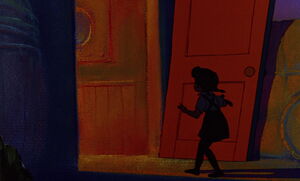 Penny quietly sneaking out to the dock. 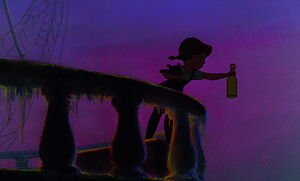 After seeing the cost is clear, Penny drops a bottle with a message into the river. 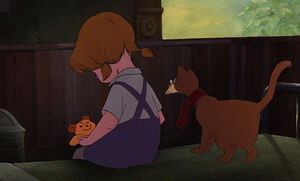 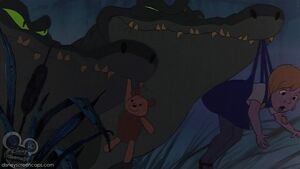 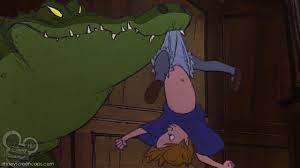 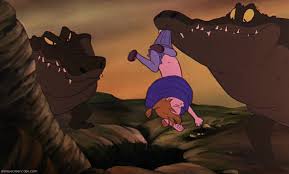 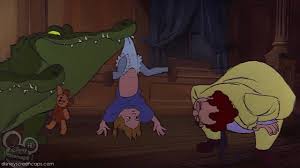 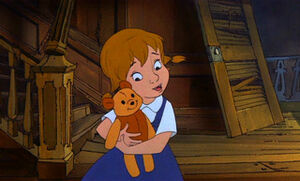 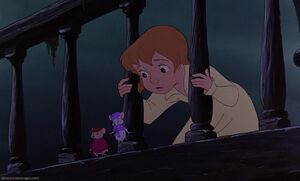 Penny with Bernard and Miss Bianca 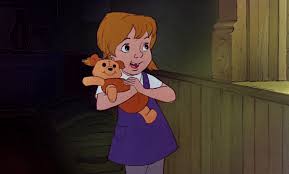 Penny and her teddy bear 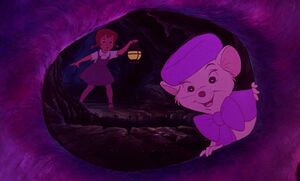 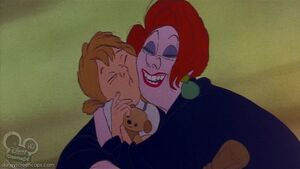 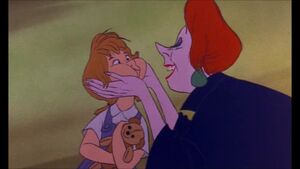 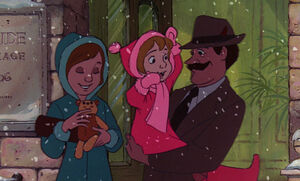 Penny is finally adopted by her new adoptive parents.