Hanging out with Gumball
Being school cheerleader

Some faculty/kids at school (sometimes)

Penelope "Penny" Fitzgerald is a supporting character in The Amazing World of Gumball. She is the love interest and eventual girlfriend of Gumball Watterson. She is one of the cheerleaders. She is sometimes part of the main group.

She is a shape-shifting fairy, formerly in a peanut shell, who is in Miss Simian's class in Elmore Junior High.

Gumball and Penny have always had massive crushes on each other, but the two of them had always struggled to express their feelings until the events of the episode "The Shell", when Gumball finally confesses his feelings to her, and the two kiss. The two have been dating as of that moment. She was part of the Treehouse Girls until it was disbanded due to the treehouse being cut down by Tobias and Banana Joe.

She is voiced by Teresa Gallagher.

From Season 1 to "The Shell," Penny was an anthropomorphic peanut. Like the rest of her family, she had a set of antlers that grow out of her head. In Season 3, the episode "The Shell" revealed that Penny underneath her shell is a shape-shifting, fairy-like creature. She can transform into any animal, and every time, the animal has a set of antlers.

In Season 2, the design of Penny's shell had been altered. Previously, it was straighter and shaped more like her father's shell, but then it was curved to resemble her sister's and her mother's. Her antlers also became darker and smaller. Also, the holes in the shell on her arms are missing.

Penny does not normally wear much clothing, aside from a pair of orange slippers with white knee socks and some red and white wristbands. However, she is often seen carrying white pom-poms.

In Season 3, her design is the same as Season 2 until in "The Shell." After breaking free of her shell, thanks to Gumball, the contents of her shell are revealed. She can shape-shift into any creature, depending on her emotions, but her default form seems to be a yellow-orange gradient fairy-like creature with antlers. Her body takes on the shape of her shell, and the upper half of her body gets progressively lighter shades of orange and yellow in coloration. Her real eyes and mouth are now seen, and also has visible white eyelashes connected to her eyes. She also has wings, which she can use to hover above the ground. After the events of "The Shell," Penny remains in her fairy-like form.

Penny is very nice and friendly. She sticks up for her friends often, implying she has a strong sense of integrity.

She is one of the few people to understand Gumball, whom she has a crush on. The feeling is mutual, but neither of them has ever had a chance to properly express their feelings, despite that it is clearly evident, that is, until "The Shell."

She has represented independent signs of getting annoyed on occasion, like becoming angered (even resorting to deception) to her father in the episode "The Knights," when he forbid her from seeing the Wattersons, and tiring of the conflict between Gumball and Tobias in the same episode. However, she is exceedingly grateful and ecstatic when Gumball saves her from accidentally getting hit by her father's vehicle, and relieved when she realizes her father is okay as well, showing that she is self-sufficiently forgiving and caring.

She also seems to be athletic, as she is an excellent cheerleader, and was/is part of the synchronized swimming club. Also, in "The Dress," she was one of the first people to finish running around the track.

Without her shell, she is very self-conscious, running away at the first sign that someone believes her to be a monster. Even worse, she transforms into the said monster as she runs away, fulfilling their expectations. After coming to terms with herself, though, she has become more open and enthusiastic.

When out of her shell, Penny can transform into any creature depending on her emotions.

Because Penny is a fairy-like shapeshifter, she can transform into any creature based on her emotions. In every form, she has a set of antlers. 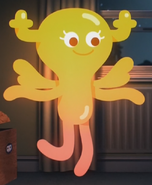 Penny as a fairy without her shell.

Penny as a Gremlin

Penny as a giant arm

Penny as a Gargoyle

Penny as a Jackelope

Penny as a Minotaur

Penny as a Boar

Penny as a Dragon

Penny as a Sasquatch

Penny as a Werewolf

Penny as a Gorgon
Add a photo to this gallery

Penny being infected by an infected Gumball

Gumball and Penny at the mall for their date 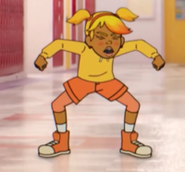 Penny as a human

Retrieved from "https://hero.fandom.com/wiki/Penny_Fitzgerald?oldid=2177211"
Community content is available under CC-BY-SA unless otherwise noted.