Heroes Wiki
Register
Don't have an account?
Sign In
Advertisement
in: Looney Tunes Heroes, In Love, Cartoon Heroes,
and 36 more

Owe himself an apology for letting everyone down (succeeded).
Stay role of himself.
Maintain his own innocence by any means necessary (both ongoing).

Pepé Le Pew (simply known as Pepe) is a major character in the Warner Bros. Looney Tunes and Merrie Melodies series of cartoons, first introduced in 1945. A French skunk that always strolls around in Paris in the springtime, when everyone's thoughts are of "love", Pepé is constantly seeking "l'amour" of his own. However, he has two huge turnoffs to any prospective mates: his malodorous scent, and he cannot take 'no' for an answer, blissfully convinced that the girl is flirting with him, even when she physically assaults him.

Pepé was going to have a cameo in Who Framed Roger Rabbit, but was later dropped for reasons unknown.

Pepé made several cameo appearances on the 1990 series Tiny Toon Adventures as a professor at Acme Looniversity and the mentor to the female skunk character Fifi La Fume. He appeared briefly in "The Looney Beginning" and had a more extended cameo in "It's a Wonderful Tiny Toon Adventures Christmas Special". The segment "Out of Odor" from the episode "Viewer Mail Day" saw character Elmyra disguise herself as Pepé in an attempt to lure Fifi into a trap, only to have Fifi begin aggressively wooing her.

Pepé also made a cameo appearances in the Histeria! episode "When America Was Young" and in the Goodfeathers segment, "We're No Pigeons", on Animaniacs.

In the 1995 animated short Carrotblanca, a parody/homage of the classic film Casablanca, both Pepé and Penelope appear: Pepé (voiced by Greg Burson) as Captain Renault and Penelope (voiced by Tress MacNeille) as "Kitty Ketty" (modeled after Ingrid Bergman's performance as Ilsa). Unlike the character's other appearances in cartoons, Penelope (as Kitty) has extensive speaking parts in Carrotblanca.

In The Sylvester and Tweety Mysteries, in the episode, "Platinum Wheel of Fortune", when Sylvester gets a white stripe on his back, a skunk immediately falls in love with him. This is not Pepé, but a similar character identified as "Pitu Le Pew" (voiced by Jeff Bennett). However, he does say, "What can I say, Pepé Le Pew is my third cousin. It runs in the family". Pepé would later appear in the episode "Is Paris Stinking" (once again voiced by Greg Burson), where he pursues Sylvester who is unintentionally dressed in drag. Pepé would appear once more in Tweety's High-Flying Adventure, falling in love with both Sylvester and Penelope (Sylvester had gotten a white stripe on his back from Penelope as they fought over Tweety), actually showing a preference for Sylvester.

Pepé also appears in Space Jam taking part in the Tune Squad led by Michael Jordan. He was originally planned to appear in the film's sequel Space Jam: A New Legacy, but was cut due to Pepé no longer appearing in the upcoming Warner Bros. projects.

Pepé was, at one point, integral to the storyline for the film Looney Tunes: Back in Action (voiced by Bruce Lanoil). Originally, once Bugs Bunny, Daffy Duck, DJ, and Kate arrived in paris, Pepé was to give them a mission briefing inside a gift shop. Perhaps because of the group receiving their equipment in Area 52, Pepé's scene was cut, and in the final film, he plays only a bit part, dressed like a police officer, who tries to help DJ (played by Brendan Fraser) after Kate (played by Jenna Elfman) is kidnapped. However, some unused animation of him and Penelope appears during the end credits, thus giving viewers a rare glimpse at his cut scene, and his cut scene appears in the movie's print adaptations. Pepé also appears in Space Jam (voiced by Maurice LaMarche), where his voice has curiously been changed into an approximation of Maurice Chevalier, as opposed to more traditional vocalization.

In Loonatics Unleashed, a human based on Pepé Le Pew called Pierre Le Pew (voiced by Maurice LaMarche) has appeared as one of the villains of the second season of the show. Additionally, Pepé and Penelope Pussycat appear as cameos in a display of Otto the Odd in the episode "The Hunter." In the episode "The World is My Circus," Lexi Bunny complains that "this Pepé Le Pew look is definitely not me" after being mutated into a skunk-like creature.

A 2009 Valentine's Day-themed AT&T commercial brings Pepé (voiced by Jeff Bennett) and Penelope's relationship up to date, depicting Penelope not as repulsed by Pepé, but madly in love with him. The commercial begins with Penelope deliberately painting a white stripe on her own back; when her cell phone rings and displays Pepé's picture, Penelope's lovestruck beating heart bulges beneath her chest in a classic cartoon image.

A baby version of Pepé Le Pew appeared in Baby Looney Tunes. In the episode "New Cat in Town," everyone thought that he was a cat. Sylvester was the only one who knew the truth. When Daffy was playing with a laptop, Sylvester removed the battery because he was afraid that everybody would avoid him. We also see a grown up version of him on the laptop. In another episode, titled "Stop and Smell Up the Flowers", Pepé Le Pew is shown to be good friends with a baby Gossamer, and seemed slightly older than his previous appearance.

Pepé Le Pew has appeared in The Looney Tunes Show episode "Members Only" voiced by the late René Auberjonois in Season One and by Jeff Bergman in Season Two. He was present at the arranged marriage of Bugs Bunny and Lola Bunny. Of course Lola eventually fell in love with Pepé Le Pew. He also made a short cameo appearance with Penelope Pussycat in the Merrie Melodies segment "Cock of the Walk" sung by Foghorn Leghorn. He appeared in his own music video "Skunk Funk" in the 16th episode "That's My Baby". He also appeared again in another Merrie Melodies segment "You Like/I Like" sung by Mac and Tosh. His first appearance in the second season was in the second episode, entitled, "You've Got Hate Mail", reading a hate-filled email accidentally sent by Daffy Duck. He also had a short appearance in the christmas special "A Christmas Carol" where he takes part in the song "Christmas Rules." In "Gribbler's Quest," Pepé Le Pew is shown to be in the same group therapy with Daffy Duck, Marvin the Martian, and Yosemite Sam.

Pepé Le Pew is one of the main characters in the New Looney Tunes show, but he is depicted a bit differently compared to his previous appearances. He is now a arrogant secret agent wearing a red tuxedo and has an exaggerated combed back hairstyle.

Pepé Le Pew made a cameo in a MetLife commercial in 2012 titled, "Everyone". In it, he was shown hopping along in the forest and when he sees his love interest Penelope Pussycat uptop the back of Battle Cat, he immediately hops after her.

Pepé Le Pew has appeared in Looney Tunes: Rabbits Run voiced by Jeff Bergman. In this film, he is the head of a major perfumery who Lola wants to create a signature scent for. 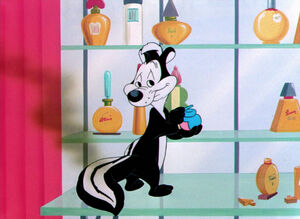 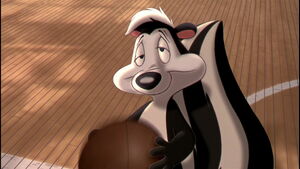 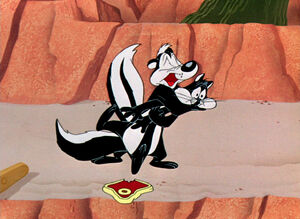 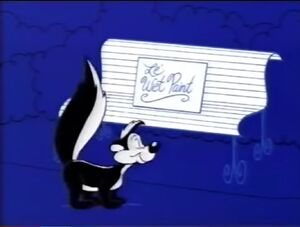 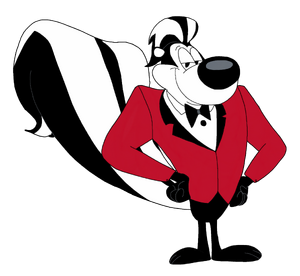 Pepé, as he appears in New Looney Tunes. 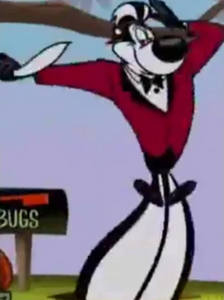 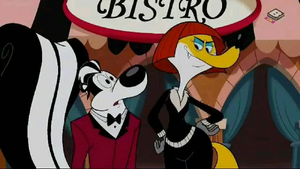