Aid Iron Man.
Defeat supervillains (both ongoing).
Defeat Hydra and end their regime in the United States.
Acquire DNA samples of Tony Stark to rebuild his body (both succeeded).

Virginia "Pepper" Potts, later known by her superhero name Rescue is a fictional character in the Marvel comics, and supporting character from the Iron Man comic books and movies. She is Tony's secretary, assistant, and longtime friend, and later becomes a armored superhero to stop threats.

In the Marvel Cinematic Universe, she is portrayed by Gwyneth Paltrow.

Virginia Potts was called "Pepper" because of freckles and red hair, and was working for Stark Industries when she spotted an accounting error. She informed Tony of the error, and having saved his company a large amount of money, she was promoted by Stark to be his personal assistant. Pepper became infatuated with Stark, but this changed when he hired Happy Hogan, who became his new body guard.

Happy and Pepper argued constantly, and he eventually confessed having an attraction to her, but she rebuffed him saying she was herself to be the future Mrs. Stark. Later on, she spotted Jack Frost breaking in, and Pepper used the telephone to warn Tony. In addition, she was also present when the Crimson Dynamo sabotaged a test launch of a new Stark missile, and again when the Melter attacked the company.

She continued working for Stark, delivering the news to Tony that one of his business associates, Charleton Carter, had backed out of a deal. She was unhappy when Tony pretended to ask her out on a date, as a cover to change into his Iron Man suit, leaving her behind in a locked room instead. She stilled tried impressing Tony, but when she desperately needed to take someone to a employee's dinner, she reluctantly called Happy, who assumed it was a sign that Pepper liked him. Though Tony encouraged their relationship, Pepper managed to go on a date with him.

Pepper was later taken prisoner when the Unicorn attacked Stark Industries, but she was saved by Iron Man. After the fight, Tony and Pepper visited Happy due to the Unicorn injuring him, and Stark questioned was Pepper's sympathy genuine or to make him jealous. When Happy asked Tony to suggest to Pepper that she could go on another date wit him, she jumped to the conclusion that Stark wanted to go out on a date with her instead. The two went out to a fair, which featured an archer named Hawkeye, and Tony stopped a crime there.

Eventually, Pepper and Happy fell in love, and they eloped and married, and became worried for him when he was standing in for Iron Man. During one of the stand in's, he was injured and turned into the freak, and Pepper made him swear never to put on the Iron Man armor back on again. Fearing that they would always be dragged into battles, Pepper quit her position at Stark International, and took Happy to a clinic near Chicago to heal.

Despite this, she would return to help save Iron Man when he almost froze to death by the Blizzard. Pepper supported Happy in all of his odd jobs, but they never seemed to last, and they later decided to adopt children. While Stark was presumed dead, Pepper and Happy divorced, and though the reasons were never admitted, she apparently had an affair with a former college boyfriend.

After Stark's return both worked with him at Stark Solutions in Seattle, and would keep contact with Iron Man. The two became closer, much to Happy's sadness, and it didn't help his feelings of self-doubt. Stark entrusted Pepper with a special remote that could shut him down, however, Pepper was tortured and forced to hand it over, and the trauma lead to her miscarrying. Pepper and Happy reconciled afterward, as Iron Man felt guilty for placing her in danger despite dealing with the remote.

When Clarence Ward stole an Iron Man armor suit and attempted to frame Stark, Pepper and Happy were attacked while in an elevator. Thankfully, they were saved by Tony, and were able to escape, as Pepper activated a fail-safe disabling Iron Man armors worldwide.

After Happy's death, Pepper was placed in charge of the Order by Stark, and she took the name Hera and used advanced computer hardware and prosthetics to monitor the team's on missions. Upon the absorption of the Order into the Initiative, Tony offered her a job on the special projects team at Stark Enterprises, and she accepted. Pepper was working with Stark at an office function for the new Stark Dynamics in Taipei, and was critically injured due to Ezekiel Stane's actions. The destruction of the building damaged her badly, and she shrapnel presence near her heart, but the Rand Corporation surgically implanted a pacemaker chest-plate to save her.

When Norman Osborn began to have his H.A.M.M.E.R. agents storm every Stark Industries building in the world to prevent Tony from receiving assistance, Pepper escaped after finding a suit of armor specifically designed for her. She used the suit to escape from being arrested after Osborn issued an arrest warrant for Tony and to seize all of his facilities. Pepper later learned that the suit contained an AI version of Jarvis to assist her and answer questions, and suited her biology and cybernetic enhancements.

Since then, Pepper served as a superhero under the name Rescue, and engaged in many adventures such as fighting Mokk the Breaker of Stone when Tony was made unavailable. After Tony's disappearance, she would go stop regional attacks, which brought her in conflict with the new Iron Man, James Rhodes. Pepper with the aid of Rhodey, had to destroy J.A.R.V.I.S. after it had kidnapped her due to it developing romantic feelings for her. As a result of this, Pepper decided to leave her alter-ego behind, and helped Bethany Cabe reunite the heroes from the Dynasty and the Triumph Division to rescue Tony from the Mandarin.

Pepper eventually became resent of Tony once she began dating P.R. representative Marc Kumar , who later proposed to her in Scotland, and concluded that Stark treated her badly. Unbeknownst to Potts, Marc was given the Liar ring of the Mandarin, and due to his hatred of Stark, joined other Mandarins. When Iron Man, Iron Patriot, Abigail Burns and Trojan Guard pinned the Mandarins down, Marc revealed his identity as the Liar to Tony, and planned to use a kidnapped Pepper as collateral to escape.

Tony blasted the Liar with his Repulsor that hit Pepper, who was actually an illusion Tony had seen through, and injured Marc. Marc was taken into custody by S.H.I.E.L.D., and Pepper returned her engagement ring to him.

After the events of World War Hate, Tony's moral compass was inverted, making him become an egotistical version of himself and started drinking again. Pepper tried to talk sense into Tony, to no avail, and activated a digital copy of Stark's mind as part of years old contingency plan. Pepper lured Tony to Resilient HQ in order to allow the Stark A.I. to get him and fix him, and took him to the Resilient Space Station while Pepper secured Jamie, Stark's protégé.

The A.I. failed to revert the real Tony back to normal, and Stark returned to Earth and was confronted by the digital copy. Pepper arrived in her new Rescue armor that the digital Tony built, and used sonic attacks to weaken Stark's symbiote-based armor, and took an unconscious Tony back to New York. His defeat had been a ruse, however, as his armor was actually protected against sonic attacks, and he allowed himself to be taken solely because the digital Stark was housed there. After Tony destroyed his digital copy, Pepper gave up on Stark, as she realized failed to rescue him from himself, but swore to discredit Stark to ensure he wouldn't have his own way without facing the consequences.

After the events of the second superhuman Civil War, Pepper investigated Riri Williams, Tony's protégé who had taken up his mantle by going by Ironheart. Pepper aided Ironheart in fighting Techno Golem and her clan of biohacked ninjas, and gave her support after defeating them. Afterward, Pepper became a member of the Underground to defeat Hydra after they took over the United States, and were successful in destroying their regime.

She is very intelligent, helping Tony with his inventions, such as Iron Man suits. She eventually gains a suit of armour (and a heart implant) of her own as the heroine Rescue. Despite her lack of training in hand-to-hand combat, she can definitely hold her own in battle. Likewise, she can also manipulate magnetism outside of the Rescue armour, so long as she has the implant in her chest. This allowed her to fight off Sandman and Electro during one arc in Invincible Iron Man.

R.T. Node: After being injured, Pepper was implanted with a Repulsor Tech node in her chest. The R.T. node is linked to her brain, enhancing her metabolism, core strength, reaction time, reflexes and intelligence.

Hera's Powers: As Hera, Pepper was able to communicate with the Order.

Rescue Armor: The Rescue was an emergency search and rescue armor, capable of defense and protection for its wearer. After gaining the armor, Pepper was given new models of the suit by Tony Stark and Stark's A.I., granting her superhuman abilities. Pepper also had the aid of J.A.R.V.I.S., who ran the armor's system and possessed communication and recording capabilities, and provided support during missions. 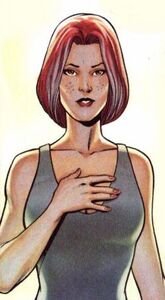 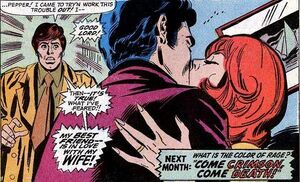 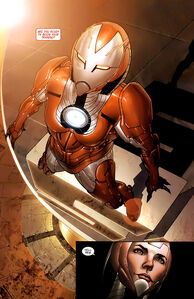 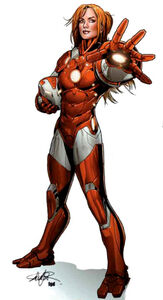 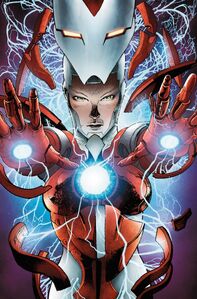 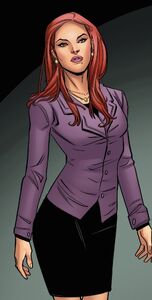 Pepper in "The Superior Iron Man". 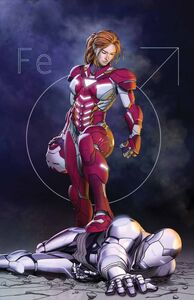 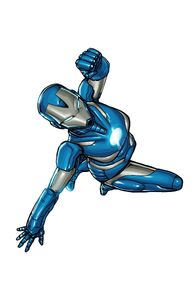 Peppter in 2020 Rescue comics, donning her blue armor from the MCU films. 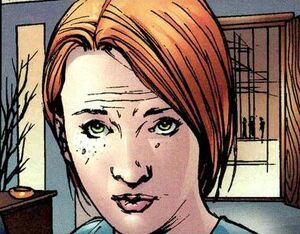 Pepper in the "Ultimate Universe". 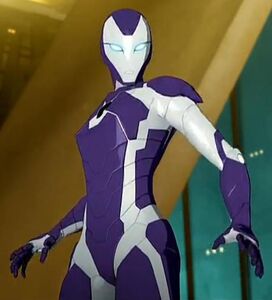 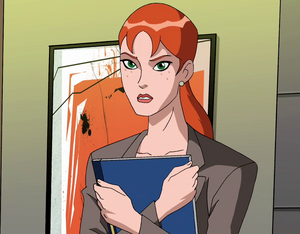 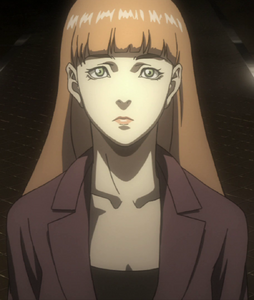 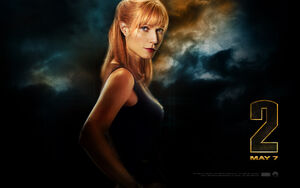 Gwyneth Paltrow as Pepper Potts in the Iron Man movies 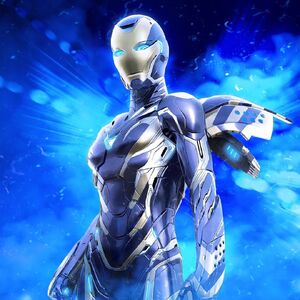 Pepper as Rescue in Avengers: Endgame.