Member of Star Fox
Stand-in General for the Corneria Army

Peppy Hare is a character from Star Fox, and he is the elder figure of the team. He first appeared in Star Fox for the SNES in 1993. He was originally part of the original Star Fox team along with James McCloud, and Pigma Dengar, until the latter betrayed the team, leading James McCloud to be killed by Andross.

Peppy appears as a gray haired rabbit with noticeable buckteeth. His general appearance hasn't changed much over the years, but age has caused him to appear slightly older, as he has gained glasses and his ears began to droop. He also gained a bushier moustache and bushier eyebrows.

Peppy Hare was a member of the original Star Fox led by James McCloud. General Pepper had sent them to the planet Venom to quiet down possible threats from the exiled Dr. Andross. When the team reached there, it was found that the third member of the team, Pigma Dengar, was a traitor on Andross's payroll. James and Peppy were imprisoned, but managed to escape. Though Peppy was successful in escaping, he did so with numerous injuries and James forced him to leave alone and was supposedly killed by Andross. Peppy barely limped home to tell James's son, Fox, of his father's fate. When Fox was old enough, he took up his father's role as leader of the Star Fox team and Peppy, with Fox's friends Slippy Toad and Falco Lombardi joined the new team.

The new Star Fox team was truly tested when Andross declared war on the Lylat System. Pepper once again called on the team to fight of Andross armies. Peppy and his teammates made their way to Corneria, but found the planet's capital in ruins. The team crossed through the capital to battle one of Andross's two lieutenants stationed on Corneria. Depending on the lieutenant they faced, Peppy and the rest of Star Fox went to the Meteo Asteroid Belt or Sector Y.

Peppy was finally given the chance to avenge his fallen leader when the team crossed skies with Star Wolf on Fichina. Star Wolf was a mercenary team like Star Fox, though was less bound by morals and led by Wolf O'Donnell. They had been hired by Andross, but what caught Peppy's eye was that the traitorous Pigma was on the team. The two battled it out and Pigma was defeated. The Star Fox team made their way through several more planets before finally arriving at their final destination, the planet Venom. Once again, they were attacked by Star Wolf, who now had more advanced ships but were once again defeated by Star Fox. Peppy had no part in the final battle against Andross as Fox had decided to go it alone. Peppy was next seen accepting the reward for Star Fox with his teammates and then left when ROB 64 called Fox that the team's mothership, the Great Fox, was ready to leave.

For eight years, the Star Fox team failed to gain a job that had any significant pay. One day, General Pepper sent a message to the team asking for help on the planet Sauria. He stated that the planet was literally falling apart and the Star Fox team agreed to help. Fox was forced to go it alone on the planet surface, but Peppy gave Fox help in providing maps and advice on areas through Fox's communicator. When Fox first laid eyes upon Krystal, Peppy snapped him out of his daze and later advised Fox that the King EarthWalker might know the reason for the planet not being reunited at the placement of the SpellStones. Later, after Andross's final defeat, Peppy remembered that he had recieved a message from Krystal thanking Fox. When she arrived on the ship, Peppy was the only one not to poke fun at Fox for his obvious attraction to Krystal.

With a new member found in Krystal, Peppy decided that it was time for retirement from piloting. He stayed with his team though, and acted as the team's strategist and the Great Fox's pilot. Under the orders of General Pepper, he and the rest of the team flew into the space above Fortuna to fight the remainder of Andross's army led by the Andross's nephew, Oikonny. He launched the team's Arwings and, when they chased Oikonny to the planet's surface, advised them that they could never tell what a cornered beast might do. When Oikonny's ship was destroyed by an Aparoid, Peppy recognized it immediately and commanded Fox to retrieve its Core Memory when the creature was destroyed. After General Pepper and Beltino Toad told the team of the Aparoid menace, they responded to distress siganl emanating from an outpost on Katina. Fox went on foot and Peppy sent him a Landmaster tank to help the situation. After Fox had defeated several Aparoids, Aparoid Hatchers began to appear and Peppy warned Fox that they could spawn more Aparoids. A gargantuan Aparoid appeared after the destruction of all hatchers, but when Peppy told Fox to retrieve the Core Memory after its defeat, Pigma appeared from within the base and stole the core. Peppy called the team back and followed Pigma to the Sargasso Space Hideout. Peppy cursed Pigma for going to such a haven of foul enemies and commanded the team to take control of the hideout. When the leaders of the hideout were revealed to the Star Wolf team, Peppy told Fox that there was no choice but to fight them and the team learned that Pigma was on Fichina.

Peppy told the team that, though Fichina was usually covered in a perpetual blizzard, a climate control center made it habitable. He then told them that Pigma had shut down the center and the blizzard had started up again. Peppy sent Fox down to the surface in a Landmaster and told him to destroy the generators of the device's defense shield. After Fox was saved by Falco after being ambushed in the base, Peppy sent him an Arwing. Peppy told the team that the Aparoids had infected the device and that Fox would have to blast it to prevent it from exploding. Falco was surprised at the Aparoids being able to control machines and Peppy responded by saying that those with weak wills are easily possessed, something that reminds Fox of his father. The team then followed Pigma to the Asteroid Belt where they found that Pigma was building a base, something that Peppy was unsurprised by. Though even he was surprised when Pigma was fused into a giant Aparoid weapon. Peppy told Fox to dodge devestating laser Pigma now used and the machine was soon destroyed. Fox retrieved the Core Memory and sent it to General Pepper, who told them it was time to go to the Aparoid Homeworld. Before doing so, Krystal recieved a telepathic message from Sauria and Peppy flew the Great Fox there to aid the Saurians. Peppy monitored the fight in the skies with Slippy and Falco while Krystal and Fox fought on the ground.

When the team heard that Corneria had been invaded and the army decimated, Peppy forced the team to head there immediately. He commanded Fox to take out a series of radar jammers so that the team could easily target enemies. Peppy sent Fox an Arwing when the jammers were destroyed, but the Aparoids destroyed the Arwing and Fox was saved by Wolf. Peppy noticed the general's flagship on the horizon, but the general was infected by Aparoids. Peppy believed that Fox could end the battle by destroying only the machine parts and when the ship fell, Peppy flew in an Arwing underneath the general to catch him before the ship hit the ground, greatly injuring himself so that even he wasn't sure he'd survive[1]. With Pepper incapacitated, Peppy led the invasion to the Aparoid Homeworld. Before they left, the gateway they were using to warp there was attacked by Aparoids, but they were quickly expelled.

Peppy led the Corneria forces to the homeworld and sent Fox and Krystal to floating city above the entrance to the lair of the Aparoid Queen. Peppy told Fox that they were losing the fight fast and that they had already lost twenty percent of the fleet after Fox had destroyed just one Aparoid Hatcher. After all the hatchers were destroyed and another shield had formed over the tunnel, Peppy appeared in the skies above the city with the Great Fox consumed almost entirely by Aparoids. ROB told Peppy that the ship would not take any more damage and Peppy told them that it didn't matter. He destroyed the city with the Great Fox's lasers and told the team that he had to crash the ship into the shield. Peppy flew the ship into the shield and the team flew through the broken shield.

When General Pepper grew ill two years later, he decided to pass on his role to Peppy. Peppy was one of the only two Star Fox members to find happiness after the break up, and the only one to have not left due to Fox's conflict with Krystal.

This story occurs if Fox and Slippy stay on Corneria to aid Peppy after reuniting.

Peppy approached Fox after Fox had defeated the Anglar lieutenant Zazan. He asked if the team was getting back together and if Fox was going to find Krystal. He suggested that Fox ask Krystal's forgiveness. When Slippy revealed his fiancee to Peppy, he was originally skeptical[2], but Fox told him that Slippy was not lying. He then told Fox that they needed to focus on a strategy.

This story occurs if ROB 64 goes with Lucy to aid Peppy on Corneria.

Peppy was reunited with his daughter Lucy, who had gone to Corneria to find him. The reunion was short lived as Peppy immediately flew off to find Fox.

Peppy sent Fox a message asking for help on Titania. He told Fox that a pilot had been dispatched to the planet, but had not been heard from.

After Peppy left Corneria, he met up with Fox, Falco, and Slippy on Titania and remarked that the old team was back together. There, they fought one of Andross's bioweapons controlled by a hologram claiming to be the ghost of Andross. When the bioweapon was destroyed, Peppy made the remark that he had thought he was done with Andross and claimed a machine that would neutralize the acidity of the Venom Sea. The team flew to Venom where Fox revealed that he was going to quit and find Krystal after this mission. Peppy agreed with him and the team flew into the sea and destroyed the Anglar forces. He then voted to disband the team.

After Fox had reunited with Krystal and she forgave him, Peppy sent them a message asking for help in the Asteroid Belt. He said that they were being chased by the remains of the Anglar army. After their defeat, Peppy congratulated the team.

Peppy contacted Lucy, Krystal, Katt Monroe, and Amanda saying that they had defeated the Anglar. When he got back, the four women surprised the team with a party. At some point during the night, he left the party with his daughter to talk about Vivian, Peppy's wife who died some time after the Lylat War.

The Curse of Pigma

Peppy's only role in this story was to release the system wide announcement that Star Wolf had defeated the Anglar forces. 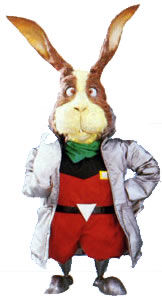 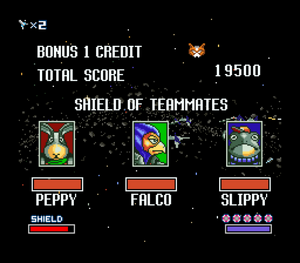 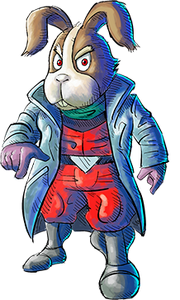 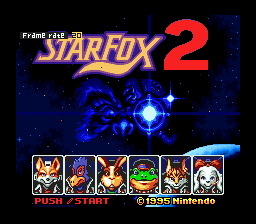 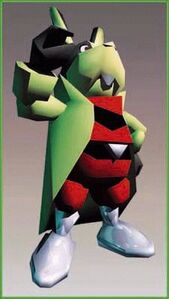 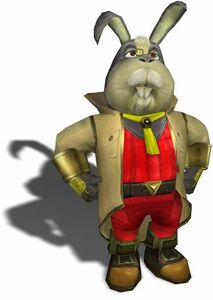 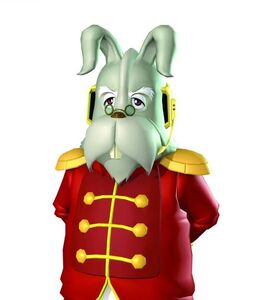 Peppy Hare as the general 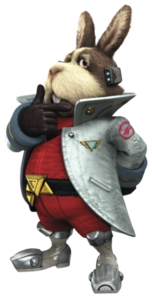 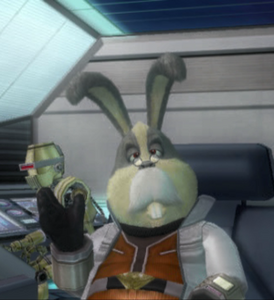 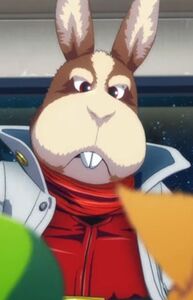 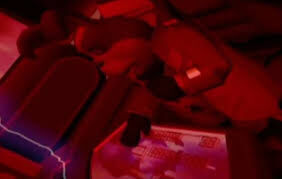 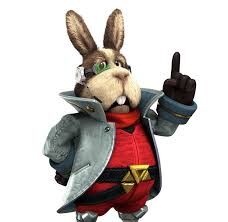 Peppy as he appears in Star Fox: Zero 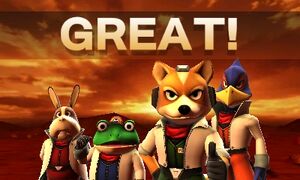 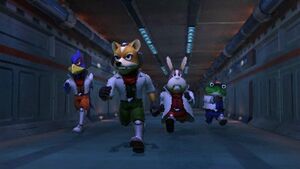 Retrieved from "https://hero.fandom.com/wiki/Peppy_Hare?oldid=2266832"
Community content is available under CC-BY-SA unless otherwise noted.