Hanging out with Mio Sakamoto

Protect the Earth from the Neuroi

No information
Perrine H. Clostermann is one of the two tetartagonists (alongside Minna-Dietlinde Wilcke) from the Strike Witches anime series.

Perrine is a 15-year-old heiress to an influential Gallian family who looks down on some of the less-refined habits of her peers. Years before the start of the series, the Neuroi's conquest of her homeland devastated her and has caused her numerous problems.

She often refuses to work as part of a team and is initially hostile towards Yoshika Miyafuji due to the latter's attachment to Mio Sakamoto, on whom Perrine has an obvious crush. Over time, Perrine is able to warm up considerably to Yoshika, and the two are shown to be good friends by the time of the movie. Perrine feels that she is responsible for the reconstruction and rehabilitation of Gallia after its liberation from the Neuroi and contributes her entire salary toward this end. When wearing her Striker Unit, she gains the dark ears and tail of a Chartreux. Perrine holds the rank of First Lieutenant and her original unit was the Forces Aériennes Galliaises Libres 602nd Flying Corps. She carries a rapier in artwork, which briefly appears in episode 9 of the second season as an heirloom from her family. She uses a Bren light machine gun. She has a lightning based spell called Tonnerre which can strike down multiple targets. Her Striker Unit is based on the Arsenal VG-39.

Perrine is snobby, self-centered and envious at times, but overtime she becomes very humble and friendly as she is determined to protect those she cares about (especially Mio Sakamoto). Perrine loves children as she acts like an big sister figure to them and likes hugging and playing with them.

Perrine is based on the French flying ace Pierre Clostermann.

Perrine's magic ability, Tonnerre, consists of a lightning based attack that expands outward from her location striking multiple targets within range. She has complained upon using the attack as it (presumably the electricity) messes up her hair. 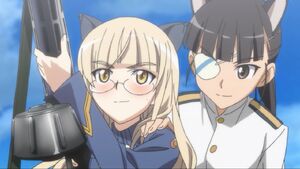