As Platyborg, 2nd Perry was programmed to show full loyalty to the notorious 2nd Heinz Doofenshmirtz, as he was willing to succeed in any task given by his master, who held him in high regards. As such, Platyborg proved himself to be quite ruthless as his master, as he was willing to exterminate anything that served as a obstacle to either himself or the 2nd Doofenshmirtz family. He was also shown to be sadistic, as when the original Perry tries to attack him (to no avail), Platyborg just gave an evil smile before fighting back, much to Perry's shock. However, following 2nd Doof's defeat, Platyborg became deprived of his evil programming and his original selfless and protective personality was resurrected before he was reunited with his family.

Just like the Perry of the original dimension, 2nd Perry was once the pet of 2nd Phineas and 2nd Ferb, as well as an O.W.C.A. secret agent assigned to 2nd Doofenshmirtz. When the O.W.C.A. learned that 2nd Doofenshmirtz plans to take over the Tri-State Area by creating an army of giant robots called the Norm-Bots, they sent over 2nd Perry to stop him. Unfortunately, unlike his original counterpart, 2nd Perry underestimated 2nd Doofenshmirtz (who proved to be far more intelligent and devious than his original counterpart) and ended up being defeated. Following 2nd Perry's defeat, 2nd Doofenshmirtz transformed him into a ruthless cyborg dubbed as Platyborg, designed and programmed to serve him as his new second-in-command and general of the Norm-Bots. 2nd Doofenshmirtz then proceeded on with his plan by unleashing both Platyborg and the Norm-Bots throughout their Tri-State Area, succeeding in his goal. Ever since then, Platyborg had been patrolling the Norm-Bots to enforce the Doofenshmirtz family's reign for the next five years and had no recollection of his past life as a pet to 2nd Phineas and 2nd Ferb, leaving them worried that he has been missing for a long time. Their sister 2nd Candace started a resistance group, bent on putting an end to the Doofenshmirtz family's rule, but Platyborg and the Norm-Bots manage to help maintain their master's reign, leaving the Resistance with little to no success. 2nd Perry's defeat also allowed 2nd Doof's wife 2nd Charlene to capture 25 more of his fellow O.W.C.A. agents and turn them into ruthless cyborgs to serve for the Doofenshmirtz family and maintain their rule over the Tri-State Area. Following the events of Across the Second Dimension, however, he reverted back to his original self albeit his robotic body intact.

Back to the Second Dimension

It's been two months following 2nd Doofenshmirtz's arrest and the Norm-Bots' destruction, and Platyborg is seen in a more positive tone as he is reunited with the Flynn-Fletcher family and that their Tri-State Area is now free from 2nd Doof's grasp. However, Platyborg now has to deal with more serious issues, such as an attack on Danville Park by giant ant robots and being kidnapped by his fellow Animal-Borgs. Several of the members include 2nd Peter the Panda (known as Pandaborg) and 2nd Pinky the Chihuahua (known as Chihuahuaborg). Eventually, he is freed by the Resistance, and 2nd Candace soon learns that 2nd Charlene was the one responsible for capturing the animal agents and turning them into cyborgs during 2nd Doofenshmirtz's reign. She decides to get to the bottom of it by confronting 2nd Charlene in person. To do so, she brings 2nd Phineas and Platyborg to confront 2nd Charlene in her penthouse, as well as a captive 2nd Doofenshmirtz (since only Doofenshmirtz relatives can pass the sensor system to get into 2nd Charlene's penthouse).

As soon as they reach the penthouse and confront 2nd Charlene in person, 2nd Candace, 2nd Phineas, and Platyborg soon learned that 2nd Doofenshmirtz and 2nd Charlene had filed a fake divorce to secure their family's finances and safety in case their reign was overthrown. 2nd Charlene also revealed that the the fake divorce, along with the attack on Danville Park and her attempt to kidnap Platyborg, were nothing more than ruses to manipulate the Resistance into bringing 2nd Doofenshmirtz over to her penthouse to free him, since she knew that they would need him to get to the penthouse. Without hesitation, all of the animal cyborgs arrive to hold the trio hostage. Platyborg and his owners are even more shocked to learn that 2nd Ferb has been captured and turned into a cyborg. However, things take a good turn when 2nd Ferb releases the trio from their cell, revealing that he pretended to be turned into a cyborg so that the Resistance can lay down their frontal attack to free the animal agents and take the evil Doofenshmirtz couple into custody. As such, Platyborg aids the arriving Resistance into freeing all of the animal agents of their evil programming, with the exception of Pandaborg, whom Platyborg defeated by having him smashed into a fallen pillar when the cyborg tried to hurt 2nd Ferb. After 2nd Candace defeats 2nd Charlene in a bo staff fight, Platyborg and the other Animal-Borgs prepare themselves to take both 2nd Doof and 2nd Charlene into custody by holding them at gunpoint. However, everyone is interrupted by the arrival of the evil couple's daughter 2nd Vanessa, who manages to help her family and Pandaborg escape in a hover car driven by her boyfriend Tony Marzulo much to the Resistance's shock and anger. Despite the notorious Doofenshmirtz family's escape, Platyborg resumes his life living with the Flynn-Fletcher family in peace as the Doofenshmirtz family have been forced into hiding.

Being a cyborg in general, Platyborg's body consists of a gray robotic suit that includes retractable wings for flying, a robotic blue left eye for pinpoint accuracy to shoot against targets, and a blade fitted on his beaver tail to slice off any armor from his enemies. He also has robotic hands than can transform into a variety of different weapons which he sees fit to use in combat; one example is when he retracted shotguns to shoot down one of the cart's wheels to prevent the original Perry and the Flynn-Fletcher kids from escaping. Another time was when he retracted a spinning double mace in his first fight against Perry. Also, just like his original counterpart, Platyborg is very strong in combat, as he proved to be a match against the original Perry during 2nd Doof's invasion of the original Tri-State Area. After his redemption and recovery from his brainwashing, his appearance is affected almost completely, his gray robotic suit stripped down to a metallic 'tuxedo', his black helmet replaced with a red metal cap, his robotic blue left eye turned yellow, his metal foot replaced with a red metal boot and his tail no longer has the blade on his tail. 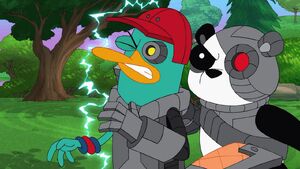 Platyborg is electrocuted by Pandaborg before his kidnapping 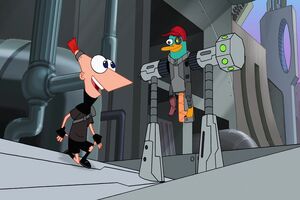 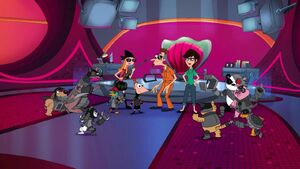 Platyborg, along with 2nd Candace and 2nd Phineas, are surrounded and captured by the Animal-Borgs 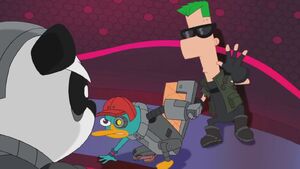 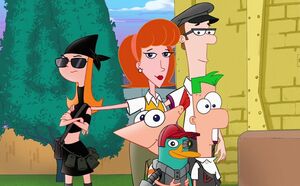 Retrieved from "https://hero.fandom.com/wiki/Perry_the_Platyborg?oldid=1867514"
Community content is available under CC-BY-SA unless otherwise noted.