Make sure Heinz Doofenshmirtz does not take over the Tri-State Area (succeeded many times, failed twice).

Stop evil-doers in their tracks (succeeded).

Perry the Platypus, codenamed Agent P, is one of the two deuteragonists (alongside Candace Flynn) of the Disney Channel animated series Phineas and Ferb, one of the two main protagonists (Alongside Phineas) of the 2011 film Phineas and Ferb The Movie: Across the 2nd Dimension and a major protagonist of the 2020 film Phineas and Ferb The Movie: Candace Against the Universe. He is Phineas Flynn, Ferb Fletcher and Candace Flynn's pet platypus, who is a secret agent working for The O.W.C.A. His immediate superior is Major Monogram and his archenemy is Heinz Doofenshmirtz.

Perry is Phineas, Ferb, and Candace's pet platypus who also works as a secret agent and highly skilled in martial arts, has speed, and reflexes.

His arch-nemesis is Dr. Doofenshmirtz who he often tries to foil his plans from world domination, which he is always successful in doing. He has shown to switch his disguises frequently. Doofenshmirtz only recognizes Perry when he has his fedora hat on, but doesn't when he doesn't have it on and only sees him as a normal platypus.

Perry realizing that everything including Phineas and Ferb getting busted and Candace trying to bust them out was all just a dream. 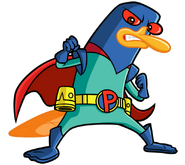