Heroic Teacher
Professor Peter Port is a minor hero in the animated web series RWBY he is a teacher at Beacon Academy.

Port appears as a slightly overweight light skinned male with gray hair and a big gray mustache, he usually has his eyes shut but when he doesn't his eyes are brown, he wears a dark red suit with a white shirt underneath and a big red tie, gold accents and buttons as well as dark red pants with brown shoes.

Port is first seen teaching a class about Grimm in which his class is mostly inattentive but he doesn't notice as he lectures Blake Belladonna, Weiss Schnee, and Yang Xiao Long are seen paying attention at first as Ruby Rose falls asleep and later draws a funny picture of Port that Yang laughs at while Weiss slowly dozes off.

During another class Port pits Weiss against a Boarbatusk in which he gives tactical information before dismissing the class.

Later after Ruby and Weiss have an argument Weiss talks with Port about how Professor Ozpin made a mistake making Ruby leader in which Port states it wasn't and that he has always trusted Ozpin's decisions.

Port is seen talking with Bartholomew Oobleck at the Beacon Dance.

Port takes part in the Battle of Vale against the invading Grimm arriving with Team CFVY.

Port and Oobleck serve as the announcers for the Vytal Festival giving informations on semblances and attacks.

During the Battle of Beacon Port and Oobleck by time for the students to leave amity colosseum and later direct people to evacuation areas.

Port and Oobleck visit Taiyang Xiao Long during their time off, talking about funny stories from their pasts until Yang enters the kitchen and he notices that Yang hasn't put on the prosthetic arm and tells her not to let her fear rule her before he and Oobleck thank Tai for his company and leave. 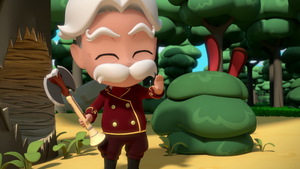