Heroes Wiki
Register
Don't have an account?
Sign In
Advertisement
in: Cartoon Heroes, Male, Partners in Training,
and 21 more

Whoever obstructs them from completing their adventures

Peter Potamus the hippopotamus (voiced by Daws Butler impersonating Joe E. Brown) and his sidekick, So-So the monkey (voiced by Don Messick) are exploring the world in Peter's time-traveling hot air balloon. When faced with a certain situation, Peter uses his Hippo Hurricane Holler technique to blow away his opponents. But they voiced by Stephen Stanton and Gregg Berger in 2009.

Peter Potamus is a hippo, wearing a yellow colored hat, and a white shirt. He's voiced by Fred Tatasciore in 2009, Chris Edgerly in Harvey Birdman: Attorney at Law and by C. H. Greenblatt in Jellystone!.

So-So is a small brown furred monkey, wearing a blue shirt and purple hat. He's voiced by Stephen Stanton in 2009 and by George Takei in Jellystone!.

Peter Potamus and So-So are two characters who are usually seen together, they on verses misadventures.

Peter Potamus is a heroic hippo and So-So is the dim-wited sidekick to Peter.

Peter Potamus and So-So have appeared in Yogi's Ark Lark and its spin-off series, Yogi's Gang. Peter Potamus guest starred in some episodes of Yogi's Treasure Hunt and has a cameo appearance in the Superstars 10 movie The Good, The Bad and Huckleberry Hound. Peter Potamus appeared in the early 1990s series Yo Yogi! where he was voiced by Frank Welker. He and So-So owned a plant store at Jellystone Mall called Peter Potamus' Plant Palace. In "Tricky Dickie's Dirty Trickies", he is allergic to goldenrods. Peter Potamus later became a recurring character on the Adult Swim parody show Harvey Birdman, Attorney at Law where he is voiced in a Brooklyn accent by Joe Alaskey and later voiced by Chris Edgerly. In it, he is a sexually charged hippo working in the firm with Harvey Birdman. Peter has the trademark phrase, "Did you get that thing I sent you?". Starting at episode 6 of season 3, "Return of Birdgirl", Peter's hands have been changed to stumps. 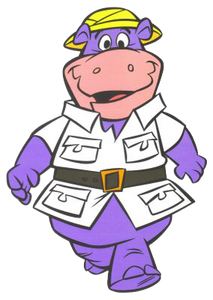 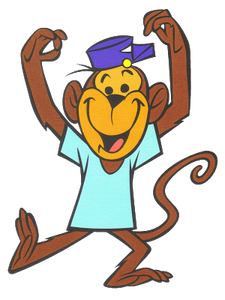