Taking care of his bee's, grilling

Peter W. is a supporting protagonist in the movie Deadpool 2. He is an experienced beekeeper who likes to grill and play sports. He was played by Rob Delaney.

When Deadpool and Weasel recruit mutants to help save Russell Collins from prison transport, Peter saw the ad and applied, thinking is looked interesting. Deadpool asked him about his mutated abilities; even when he was told he had no Deadpool powers, he let him join a team called X-Force. During the mission posted by the parachute, Deadpool was warned that strong winds would affect the fall, but he did the mission anyway. The fall failed, almost all members of X-Force died. Peter managed to land safely, but he tried to save Zeitgeist who landed in the industrial machine. Zeitgeist accidentally vomited Peter with his strongly corrosive acid that killed him.

However, Deadpool later captured the time travel device Cable used and returned a moment before Peter was killed and warned him to leave, saving his life.

Peter for all intents and purposes is a normal guy with no powers. Despite this, he shows a fair amount of bravery joining X-Force and even heroism when he attempted to save Zeitgeist. However, Peter does have no problem quitting if sufficiently aware of how dangerous a situation can be as shown when Wade went back in time to save him by telling him to just go home. 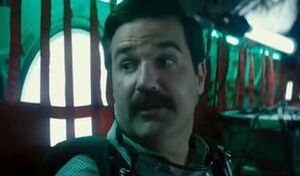 Peter with his beehive.