The Land Before Time series

Prehistoric Hero who can fly

Petrie (a.k.a. "Panicky Petrie", as he is called on the official website, and by fans), originally voiced by the late Will Ryan and later by Jeff Bennett, is one of the original main characters in the animated The Land Before Time films and television series. He is also one of only three characters to appear in every movie and TV episode. He is a type of Pterosaur known as a Pteranodon, which is one of many creatures called a "flyer" by the characters in the series. When the main characters are listed in order, Petrie is usually listed between Ducky and Spike, but if Spike is listed immediately following Littlefoot and Cera, Petrie is listed last after Ducky. He is the deuteragonist (Alongside with Cera) of the first film, one of the main protagonists of the second, third, fourth, fifth, sixth, eighth, ninth, thirteenth, and fourteenth films, the main protagonist of the seventh and twelfth films, a secondary character in the tenth film, and one of the three hidden main antagonists of the eleventh film. He is the original smartest member in the team, but starting with the TV series, he is the bravest.

Petrie is very gentle and kind-hearted, but is also naïve and nervous. He panics easily, and fears doing anything new or dangerous; thus he is often dependent on his friends for support and encouragement. He is constantly shown trying to find ways to exercise his bravery, though often to no avail. He therefore tends to idolize or admire people whom he thinks are very strong and brave, a particular example being his uncle Pterano up until the end of the seventh movie. 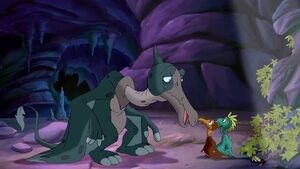 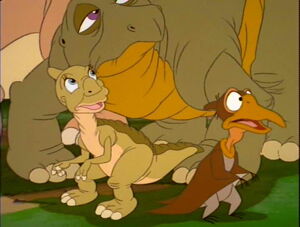 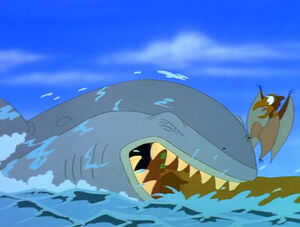 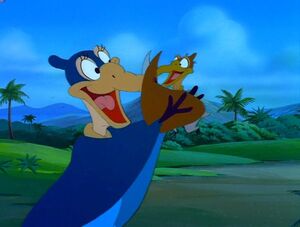 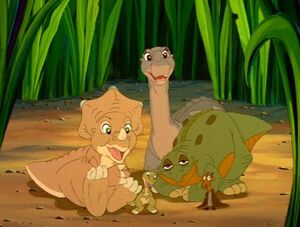