Phil is the second-in-command later leader of the Easter Chicks and a major character in the 2011 film, Hop.

He is voiced by Hank Azaria (who also voices Carlos and Bartok). In the Japanese dub from the movie, he is voiced by Ryūsei Nakao.

Phil is first seen at the start of the film working in the Easter Factory whilst dancing to music, much to the annoyance of the head chick Carlos.

20 years later, Phil is seen in E.B.'s room dancing whilst E.B. plays the drums. He quickly leaves when E.B.'s father and the current Easter Bunny Mr. Bunny comes in to question E.B. on why he isn't preparing to become the next Easter Bunny in a few moments.

After E.B. runs away to Hollywood to become a drummer, Phil is seen with several other chicks painting eggs.

Having grown tired of serving under Mr. Bunny, Carlos declares to Phil and the other chicks that he will be the new ruler of Easter. When Phil says that they should wait for E.B. to come back, Carlos asks him that if he likes E.B. so much, why doesn't he marry him. Phil is later seen helping Carlos train.

After Carlos mutates into a chick/rabbit hybrid (as the staff can only be wielded by a rabbit) and attempts to fly away in the Easter Bunny's Egg Sleigh, Phil attempts to direct the Egg Sleigh with light up wands.

However the plan fails as E.B. (knowing of Phil's love of dancing) does a drumming session, causing Phil to dance and give the wrong signals which makes Carlos to crash the Egg Sleigh.

After E.B. and Fred become Co-Easter Bunnies, Phil reforms and becomes the new head chick and is seen with Carlos (still in his hybrid form) pulling the Egg Sleigh. 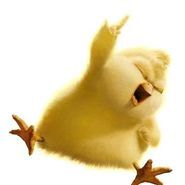 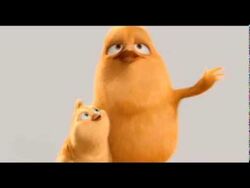 Phil and the other Easter Chicks listing to Carlos' speech.