Professor Philip Brainard is the main protagonist of Flubber.

He is a brilliant, but absentminded, college science professor and an amateur inventor who is trying to create something that would change the world; he is so obsessed with his inventions that he even puts off his own wedding to his fiancée, Sara. One day, he finally invents something that works; this substance can cause even the heaviest things to bounce in the air, 'flying rubber', but Brainard called it "Flubber". However, he sees Sara going out with another professor from another college and several criminals trying to rob him. Brainard has to find out a way to defeat the criminals and to win Sara back.

He was portrayed by the late Robin Williams, who also portrayed Mork in Mork and Mindy, Popeye in Popeye, John Keating in Dead Poets Society, Daniel Hillard in Mrs. Doubtfire, Alan Parrish in Jumanji, Jack Powell in Jack, Ramón and Lovelace in Happy Feet and Happy Feet 2, Peter Banning in Hook, Lance Clayton in World's Greatest Dad, Sean Maguire in Good Will Hunting, Fender Pinwheeler in Robots, Rainbow Randolph in Death to Smoochy, Dan Rayburn in Old Dogs, Batty Koda in FernGully, Theodore Roosevelt in the Night at the Museum franchise, and Genie in Aladdin.

Phillip Brainard is first seen waking up and going to work at Medfield College as he develops a new energy source in order to raise enough money to save the college from being closed. He gets distracted from his research by his love interest and fiancee, Sara Jean Reynolds, due to the fact that he has missed the last two weddings. On the day of the third wedding, Phillip gets approached by his former partner, Wilson Croft, who has profited from the ideas and threatens to steal Sara from Phillip and make her his wife. Phillip skips the third wedding and does his latest experiment along with his hovering mechanical partner, Weebo, as he discovers a green goo-like thing, but it escapes, causing havoc, but Phillip eventually catches it and decides to call it Flubber.

The next day, Phillip realizes that he has missed the third wedding and Sara becomes really upset at him and also tells him that their relationship is over after Phillip fails to explain what happened. That night, Phillip begins more tests with the Flubber experiment, as Chester Hoenicker's henchmen try to steal Flubber, but are knocked out by the golf ball and the bowling ball coated in Flubber gel and are bounced by the Flubber liquid. Phillip then tests his vintage Ford Thunderbird convertible with the Flubber plutonium in the engine, allowing it to fly. While testing his car with Flubber, he discovers that Wilson is beginning a relationship with Sara. After testing Flubber on one of the basketball players, Weebo goes to Sara's house and shows Sara the footage about Phillip. 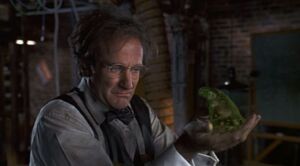