Going on adventures with his crew

hanging out with his friends and spending quality time with Leela

Claim His Main Girlfriend as the household of Fry (succeeded).

Philip Jay Fry I (born on August 14, 1974), commonly known simply by his surname, Fry, is the main protagonist of Futurama. He is a native to the 20th century who was cryogenically frozen seconds into the year 2000, having fallen in just as 1999 ended. He was revived in 2999, and subsequently became a delivery boy for the Planet Express Company.

He is voiced by Billy West, who also voiced Stimpy in The Ren & Stimpy Show and Doug Funnie in Doug.

Philip J. Fry is a dim-witted man from the 20th century who gets frozen for 1,000 years, thawing out on New Year's Eve 2999. His character is largely an attempt by the show's creators to make the connection between the 20th century and the 31st century much easier for the viewers. Often, Fry is faced with differences in the future, which he then relates to things in his time. As a result, he frequently has to defend the actions of the 20th century.

Although he is often depicted as stupid, Fry does occasionally come up with brilliant schemes to save the day, an ability which possibly comes from his intense love of Star Trek. Fry, rivaled only by the energy being of Melllvar, has the largest encyclopaedic knowledge of Star Trek in the future. Another example of Fry's occasional brilliance was during the Brain Spawn attack on Earth. With the rest of the crew stupefied, Fry was able to save Earth by exploiting the Brainspawn's weaknesses. Strangely enough, Fry's stupidity appears to be his greatest strength as he the only known person in the universe who lacks a Delta brainwave and therefore is immune to the Brainspawn's stupification fields. Ken, a Nibblonian, has noted he possesses a "superior yet inferior" mind. He lacks the Delta brainwave because he is actually his own grandfather.

Also because he lacks the Delta brainwave, he is immune to telepathy.

Fry is also usually quick to make very rash decisions, such as traveling back to the year 2000 or stowing away on Zapp Brannigan's ship to leave the universe after being upset about Colleen.

Despite being lazy, Fry's heart is in the right place, and when the situation calls for it, he will rise up to formulate a plan to save his friends, though because of his lack of intelligence he rarely comes up with any good plans. Fry cares about his friends, and in spite of Bender's awful treatment of him at times, he is still willing to risk his life to save him, which Bender reciprocates. However, it shows that Fry enjoys Bender being "mean" to him, because when Bender has to leave the planet express crew for his own saftey, Clamps takes his place and behaves in the same way Bender would towards Fry and Fry just laughs and continues.

Fry loves video games, and as such, he is usually shown to be very good at them, although not all games. He never actually managed to finish the final enemy on Space Invaders; he always had to get his brother Yancy to do it for him. Though he may not be good at all games, his skills have made him a crackshot, and he usually mans the ship's weapons when they are under attack. He has also got a lot better at fighting, by "Fun on a Bun" Also, Fry absolutely loves sewers, he once surfed (was surprisingly good) in various sewers around Earth cities with Turanga Morris & Bender, but got temporarily sick as a result.

In Simpsons/Futurama: Crossover Crisis, Fry taught Lisa Simpson how to play the holophonor. 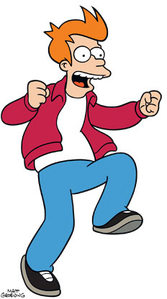 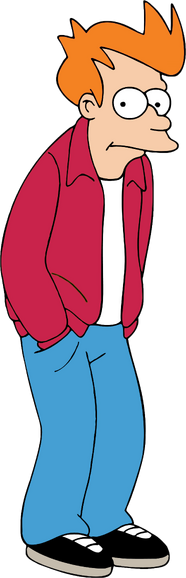 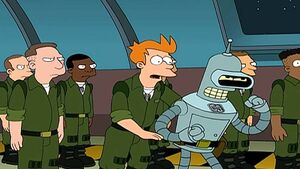 Fry and Bender in the army. 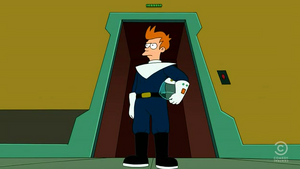 Fry as a policeman. 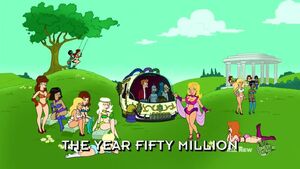 Fry, Bender and Farnsworth meets the women of the Year Fifty Million AD 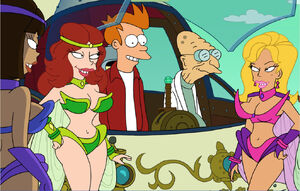 Fry with the women of the Year Fifty Million AD 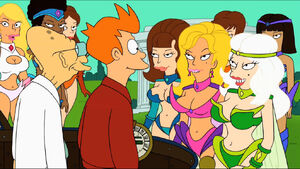 Fry looks at the women of the Year Fifty Million AD 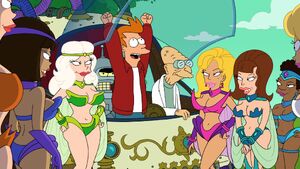 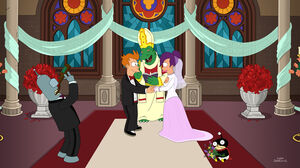