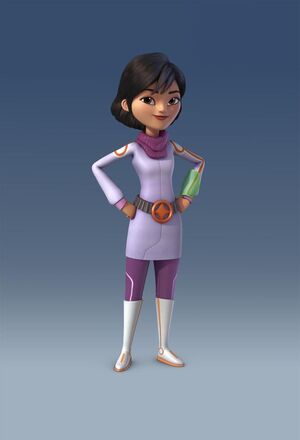 Captain Phoebe Callisto is one of the main characters who appears in the Disney Junior animated series, Miles from Tomorrowland. She is the captain of the Stellosphere and the mother of Miles and Loretta.

Being both a captain and a mother, she runs the Stellosphere with a warm heart and is a born leader to the family. She is encouraging and supportive to both her kids and is always ready for action. According to the family, Phoebe is known to be very competitive in all kinds of sports and activities. She's faster than her husband, a champion in both quantum ball and Naxos martial arts, and a sharp shooter at vaporizing space junk.

Whenever Miles and Loretta have any fallouts, she knows exactly how to get through to them and help them reconcile all by themselves. However like all mothers, she is known on rare occasions to be protective whenever her kids are in dangerous situations.

Retrieved from "https://hero.fandom.com/wiki/Phoebe_Callisto?oldid=1450230"
Community content is available under CC-BY-SA unless otherwise noted.