It evolves into Pikachu when leveled up with high friendship, which evolves into Raichu when exposed to a Thunder Stone.

Pichu is a small, ground-dwelling rodent Pokémon with pale yellow fur. Its eartips, collar, and tail are black and angular. Pichu's pink cheek pouches can store small amounts of electricity, and its tiny nose looks like a dot. Pichu is classified as a quadruped, but it can walk easily on its hind legs.

Pichu is a social Pokémon known for its playful and mischievous demeanor. It is usually found in groups and often touch tails with other Pichu as a show of courage, creating a shower of sparks that can make them cry. It is inept at storing electricity, and may discharge if amused, startled, or subjected to shock. However, it cannot discharge without being shocked itself. Charging up is more easily done on days of dryness or thunderclouds. The crackling of static electricity generated by Pichu is audible. It can zap an adult human, but will surprise itself if it does. Pichu primarily lives in the forest, though it has also been depicted to thrive in urban areas.

Pichu are very small, plump, yellow rodent-like Pokémon. It bears a similar appearance to its evolved form Pikachu, but varies in a number of ways. Pichu have diamond-shaped ears on the top of their head, with the edges being black and the interior yellow. Underneath their head is a black pattern, that somewhat resembles a collar. Their tails are completely black, and resemble a small lightning bolt, similar to its evolved forms, which are larger. Pichu also have round, pink sacs on their cheeks, used for storing electricity.

Pichu have the special ability Static. This allows for a 30% chance that an opponent will become paralyzed if it lands a physical attack on Pichu. Pichu, like its other forms, is capable of storing electricity in the pink sacs on its cheeks. Being a baby Pokémon, however, Pichu can not store as much electricity as its evolved forms. It will shock itself if any electricity leaks out of its cheeks.

Pichu evolves into Pikachu by leveling it up with max Friendship. Pikachu then evolves into Raichu when exposed to a Thunderstone.

Pichu first appeared in the Generation II games. They were obtainable in Gen II through the Mystery Egg, but also by breeding a Pikachu, until the release of Pokémon Diamond and Pearl, where they can be caught in Trophy Garden. They can be bred with Volt Tackle if the mother Pikachu holds a Light Ball.

The Pichu Brothers are a pair of Pichu who have appeared in several places, including Pikachu & Pichu, Camp Pikachu, several episodes of Pokémon Chronicles, and the Pokémon Channel special Pichu Bros. in Party Panic. Their design is similar to that of Ash's Pikachu and Sparky, in that one has a scruff of fur while the other does not.

Ukulele Pichu appeared in the Pokémon Ranger: Guardian Signs anime special, and was captured by Ben in the concluding part.

In the Magical Pokémon Journey manga

In Magical Pokémon Journey, it is revealed in The Accidental Treasure that Pikachu and Clefairy met as baby Pokémon, Pichu and Cleffa.

Also, in The Miraculous Color of the Sky ~Best Friends~, Sandy and her Raichu are reincarnated as a little girl and a Pichu.

Pichu made a cameo in Teddiursa's Picnic in a fantasy of Professor Elm's explanation about Pokémon eggs to Gold.

Gold, in his desperation, protected an Egg containing the offspring of Red's Pika and Yellow's Chuchu from the Masked Man. Soon thereafter, Gold's own talent as the "hatcher" allowed a powerful Pichu to hatch, with which he was able to defeat the villain and free Celebi from the GS Ball using Raikou's massive electrical power. Its name was unknown, though Yellow said, "It must have come from the day care where we left Pika and Chuchu!" She names it Pichu, deriving from its parents' names. It also returned with its parents to help destroy Guile Hideout's giant Kyogre monster with a Volt Tackle.

In All About Arceus IX, a Spiky-eared Pichu accompanied Pibu on gathering herbs for Celebi to cure Giovanni's disease. After she and Pibu met up with Gold, Gold saw her and teased him about finding a date.

In Pangoro Poses a Problem, multiple Pichu were among the Electric-type Pokémon that charged the Prism Tower during a blackout.

In the Pokémon Gold and Silver: The Golden Boys manga

In Pokémon Gold and Silver: The Golden Boys, Gold receives an Egg from the Day-Care Couple in A Huge Mysterious Tree!!. It hatches into Pichu in The New Pokémon Is Hatched!!, becoming one of Gold's party members.

Pichu appeared in the game Super Smash Bros. Melee as an unlockable character. It is unlocked by beating event 37 or playing 200 matches in VS. mode. In this game, Pichu has a low attack and light weight, as well as loses health with each attack it makes, making it a rather difficult character to play as. It is a clone character of Pikachu.

In Super Smash Bros. Brawl, Pichu again appears in this game, though its status has been dropped from playable character to a trophy. One of Pikachu's alternate costumes was one of Pichu's lest people thinking that the Pichu evolved into Pikachu.

In Super Smash Bros Ultimate Pichu is a playable character. Pichu is unlocked when the player defeats Pichu in battle. 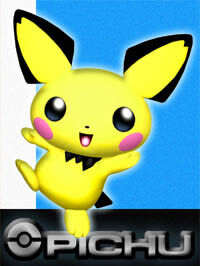 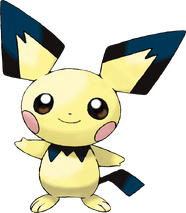 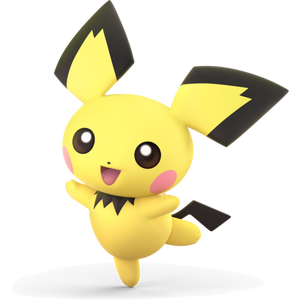 Pichu as he appears in Super Smash Bros. Ultimate. 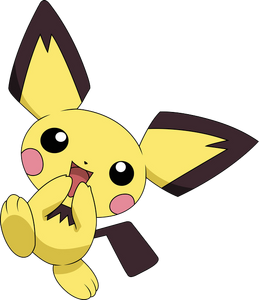 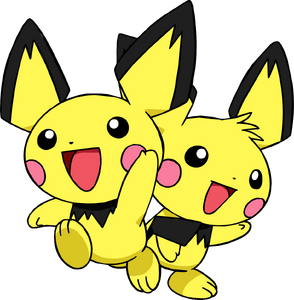 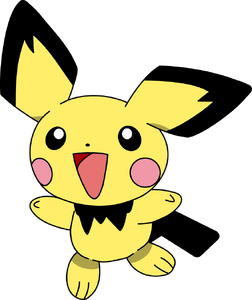 Pichu draws inspiration from mice, squirrels, and various other rodents.

Pichu is a combination of ピカピカ pikapika (onomatopoeia for sparkle) and チューチュー chūchū (the sound of squeaking). It may also be a play on プチ puchi (petit). Pichu is ultimately a diminutive of Pikachu.

Retrieved from "https://hero.fandom.com/wiki/Pichu?oldid=2220758"
Community content is available under CC-BY-SA unless otherwise noted.