Savior of his school
Defender of Newgrounds

Become King of The Portal

Pico has rounded ginger hair, a green shirt, beige pants and a pair of maroon sneakers. He has distinctive white eyes with no pupils.

Pico originates from Pico's School, a point-and-click Flash game made by Newgrounds' founder Tom Fulp in 1999. Due to the games popularity at the time, Pico quickly became a fan favorite around Newgrounds.

Since then, Pico has been appointed to mascot of the site and has made other cameo appearances in many Newgrounds Flash films, games (like Friday Night Funkin') and remains a popular character to this day.

Pico is described as "popular" by his peers, being the first one to raise his hand in class, often using his words and speaking up whenever possible, showing his confident side. He is also acts quite reckless and takes action immediately during the destruction of his school. In "Pico vs. Überkids", he doesn't show any fear when faced with the gun and even shoots the gun into his mouth twice instead of just once. However, he has an aggressive and homicidal side to him, being an extremely skilled gunman and ruthlessly fighting anyone standing in his way. In each flash animation, Pico has made a lot of friends and enemies in Newgrounds, but he is willing to battle them for control of the Portal, even if it means pitting them against each other.

In Friday Night Funkin, Pico is shown to be quite loyal to his friends. This is evidenced when he refuses to kill Boyfriend after Daddy Dearest hired him to assassinate the former due to their history and instead challenges him to a rap battle. Pico shows this side of him again once he saves Girlfriend from being executed by Captain Tankman's soldiers. He then kills any other soldiers who get close in order for Boyfriend to finish his rap battle with the Captain. 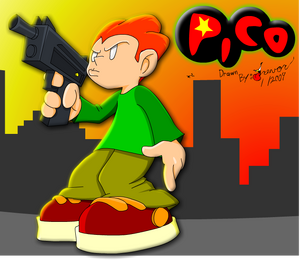 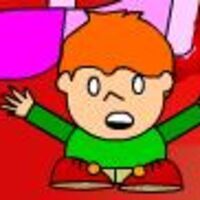 Pico In the newgrounds logo. 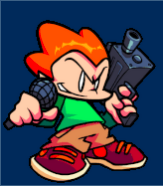 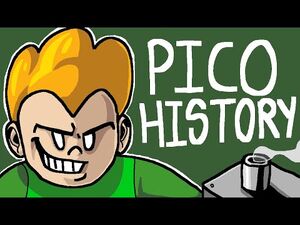 A Quick History of Pico 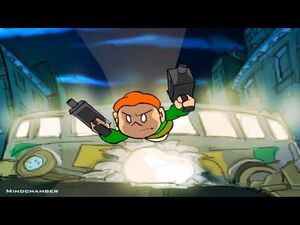 Picos' Unloaded
Add a photo to this gallery

Retrieved from "https://hero.fandom.com/wiki/Pico_(Newgrounds)?oldid=2315703"
Community content is available under CC-BY-SA unless otherwise noted.