Chapter 2: Help Chris Redfield and Alpha team contain BOWs in Edonia. (Succeeded)
Chapter 3: Defeat Giant snake and avenge your fallen comrades and work with Leon Kennedy and Helena Harper in a common goal. (Succeeded)
Chapter 4: Capture Ada Wong and stop the mission. (Failed)
Chapter 5: Rescue Jake muller and Sherry Burlington from a Neo umbrella underwater facility and defeat the BOWs called HAOS so it can’t spread the C-virus and pursuade Chris no to retiring by sacrificing his life. (Succeeded at the cost of his life)

his great-grandfather
his father

Piers Nivans is one of the main protagonists in Resident Evil 6. He was a member of the SOA (Special Operations Unit) serving under Captain Chris Redfield during the C-Virus Outbreaks. Later on in the Underwater Facility in China, his arm gets crushed as soon HAOS confronts them again So presumably out of desperation and to rescue his Captain, he injects himself with the C-Virus and develops an appendage where right arm would be capabable of shooting out electricity. After that, Chris carries Piers to escape the facility. However, as he attempts to carry Piers over to 1 of the escape pods, Piers pushes Chris in. Chris pleads with him to open the door, by attempting to reassure him that the both can escape but possibly due to his fear that he would become a B.O.W and lose his humanity, lets his captain escape alone. HAOS apparently surviving their recent encounter attacks Chris' Escape Pod but an electric discharge hits HAOS, implying that he saved Chris' life. In the end, Chris honored him by remaining in the BSAA as Piers wanted instead of retiring.

Raised into a multi-generational military family going back to his great-grandfather, as the first-born son Nivans made joining the US Army his life's goal throughout his childhood. Nivans qualified for Army Special Forces training, where he developed his skills as a sniper. However, during this training he began to question his purpose in the Army. In 2010, Nivans was scouted by Cpt. Chris Redfield, an SOA who had recently requested reassignment to the SOU, where he hoped to personally train new recruits. Nivans accepted the offer, and became part of Cpt. Redfield's regular team within the North American branch. During this time he visited the BSAA Far East Branch's training academy with his new CO to observe the next class of recruits undergoing basic training. He took notice of one trainee, Merah Biji, a BSAA researcher who requested reassignment. Though she had excelled in her year-long physical training, Nivans was quick to beat her in sparring due to his longer training, and used it to teach her about complacency and how there will always be someone stronger to fight. 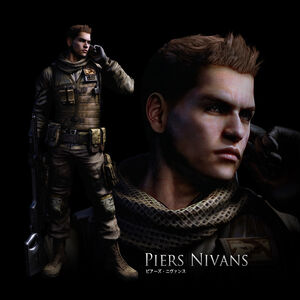 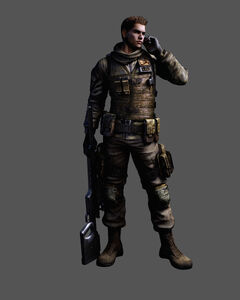 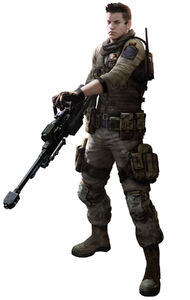 Retrieved from "https://hero.fandom.com/wiki/Piers_Nivans?oldid=2315995"
Community content is available under CC-BY-SA unless otherwise noted.